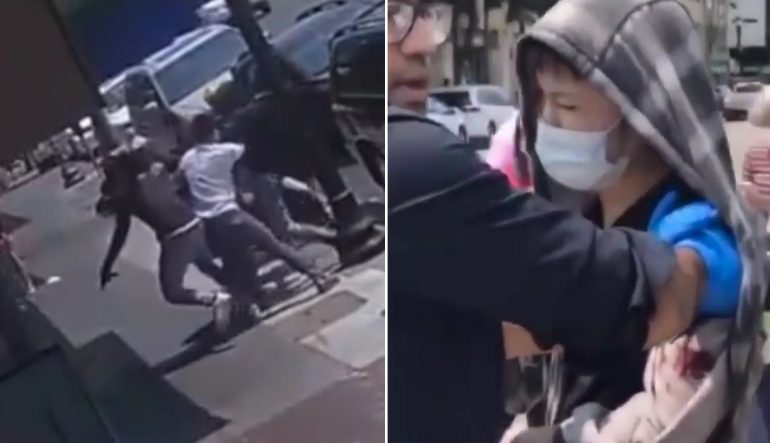 OAKLAND, California—Asians are living in fear in Oakland’s Chinatown as strong-arm robberies and assaults have increased exponentially over the past few months. On Saturday, August 7, another brazen daytime shooting took place—this time it was captured on surveillance video.

The incident began when a pair of African-American men hopped out of a car to grab the purses of two women on the sidewalk on 8th and Franklin.

During the initial struggle, two young men intervened and began struggling with the attackers. During the struggle, both robbers took out pistols and fired two shots—dropping one Good Samaritan to the ground as the struggle continued.

After what seemed like an eternity for the victims and the Good Samaritans, the assailants jumped back into their car and fled the scene. The getaway car is described as a tan or silver Honda Accord.

Thankfully, the Good Samaritan was shot in the arm and will survive.

“I could not believe it because, at that time—I believe it’s 2 p.m.—it must have hundreds of people!” Chinatown resident and property owner Barry Szeto told KPIX5.

“You’d think that wouldn’t happen. No one would be stupid enough to do it in front of the cops,” Szeto said. “There’s no law and order. We’re going back to the wild, wild, west.”

“Criminals, they are all opportunists, right?” Szeto said to KPIX5. “Just like, if they see you as an easy target, they’re going to do it. They don’t care if you are one race, the other race or their own race, right?”

Many business owners are beginning to arm themselves but are afraid to use their guns after a Chinese liquor store owner was arrested for firing a shot that stopped an African-American man from robbing a Caucasian woman in the street a few months ago.

“They arrested him and the higher-ups treated him like a criminal. Bless the police officers who refused to arrest him at the scene, but they got threatened by their superiors if they didn’t, so they had no choice,” another Chinatown resident stated.

“[Black] people feel emboldened by this new administration’s relaxed policies against crime and Gov. Newsom’s inability to understand how serious this situation is. You combine those two and you get this crime wave against the Asian communities,” a Chinatown resident stated.