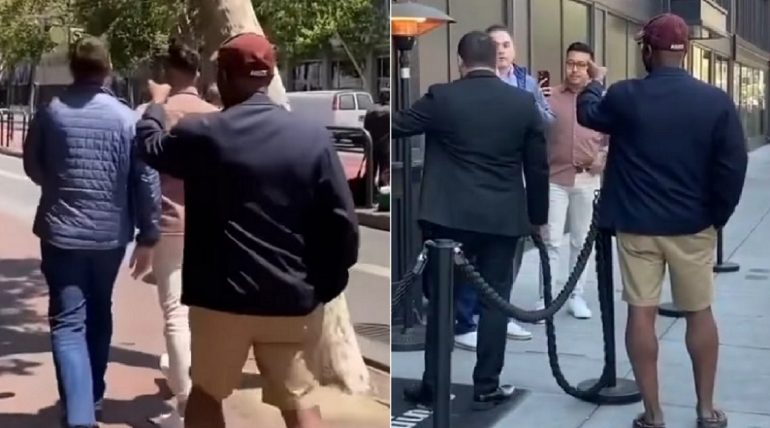 The incident was captured by a bystander who followed the ranting lunatic as he followed and continuously harassed the gay couple—a Caucasian and Asian man.

Insults from “They attacked us at Pearl Harbor on Sunday morning” to “Asian bastards”, “Asian piece of sh*t”, to “I will whop your worthless as*,” can be heard spewing from the African-American veteran’s mouth.

The gay couple walked toward the entrance of a local nightclub on Market Street, where the Caucasian man can be seen talking to 911 on the phone, the African-American man can be heard shouting, “I served this goddamn country, so I’m not racist. I don’t like you f**king Asian motherf**kers in my counry!”

The Asian man is Taiwanese, however, he’s being blamed for Pearl Harbor. Does that mean African-Americans could be blamed for the massive genocides in Africa?

No further detail is available and it is highly unlikely this African-American man would be arrested even after being identified.

According to journalist Susan D. Reynolds, morale at the San Francisco Police Department is at an all-time low and the department is actually afraid of District Attorney Chesa Boudin. Charges regularly get dropped on violent hate crimes with GBI (Great Bodily Injury), including armed home invasions.