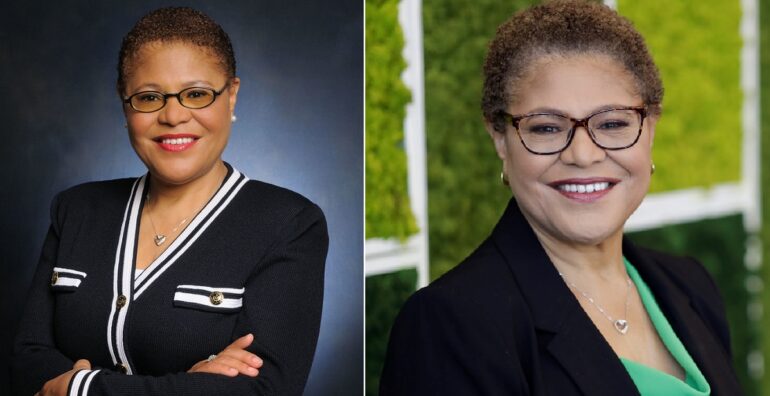 LOS ANGELES, CA—Los Angeles mayoral candidate Karen Bass said in 1992 that the burning of hundreds of Korean-owned liquor stores during the L.A. riots was a “miracle” and that the arson accomplished what her activist group had tried for years to achieve.

“That’s not the way we wanted it to happen, but the rioting accomplished in a few days what we have spent decades working to achieve,” Bass told the New York Times in November 1992.

Bass founded the Community Coalition for Substance Abuse Prevention and Treatment in the early 1990s and began organizing to shut down liquor stores in 1991—many of which were owned by Koreans.

The mayoral candidate argued that Korean-owned liquor stores served as hotspots for violence, prostitution, and other crimes in black neighborhoods.

The night before the L.A. riots, Bass met with then-Mayor Tom Bradley and discussed strategies to force liquor stores out of business, according to a Community Coalition report.

“The night before the uprising, a lot of us were in a meeting discussing how we might reduce the number of liquor stores in South Central, and a few days later, like a miracle, a large chunk of the stores we wanted to close were burned to the ground,” Bass told the New York Times.

However, her support for the destruction of Korean-owned liquor stores was a complete failure. Koreatown rebuilt itself with Korean money, gentrified the surrounding area, and the African-American community never recovered from its self-destructive riot and has since been chased out by Latinos.

“I just drove around feeling that all of the years of my involvement and all of the things I had tried to do had been a failure,” Bass admitted to the New York Times in 2011.

“I failed the young people because they felt no outlet other than to destroy.”

Bass offered little sympathy for the hundreds of store owners who lost their livelihoods because of the riots. It should be noted Bass also chairs the Congressional Black Caucus.

In a June 9, 1992 op-ed in the Los Angeles Times, Bass blamed the liquor stores and stated they helped “fuel the rage” that led to the violence.

“Community concerns also extend to the environment around the stores, where drinking often creates a climate that fosters gambling, theft, drug sales, and violent assaults,” she wrote.

Bass even went so far as to organize people in the neighborhood to petition against the reopening of any store owned by Koreans—even acknowledging her fight devolved into a racial issue, according to Daily Caller.

“If a store has contributed to community problems, we don’t want it back. The ironic thing is, when we address the problem we are told we are racist or anti-business. Then we are told the reason we are in the predicament we’re in is because we allow it to happen,” she told the San Francisco Chronicle in July 1992.