Another Asian Woman Punched in the Face in NYC 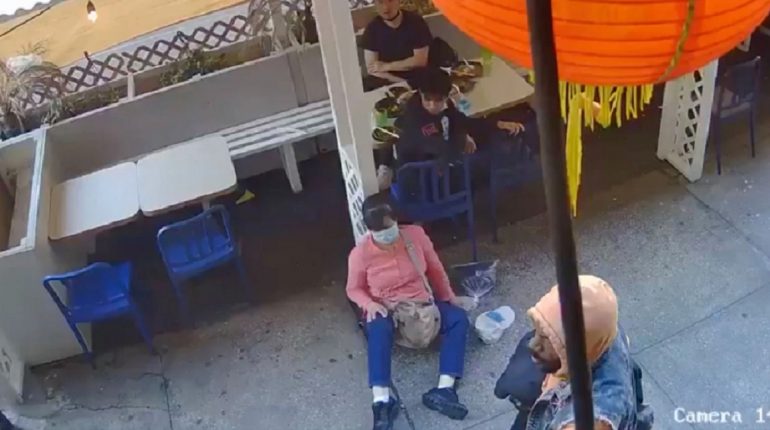 CHINATOWN, New York—Another violent attack in one of the most diverse and progressive cities in America. An African-American male randomly punched an Asian woman in the face, knocking her to the ground, right outside a Chinatown restaurant.

What’s equally disturbing, none of the bystanders had the courage to physically contain or confront the crazed African-American male, who can be heard saying “She hit me,” right after knocking the Asian woman out.

The 55-year-old victim was walking by the Kong Sihk Tong café around 6:15 p.m. when a black male in an orange hoodie and jeans can be seen whacking her for being Asian.

The victim was taken to the New York-Presbyterian Lower Manhattan Hospital in stable condition, stated the NYPD.

According to Assemblywoman Yuh-Line Niou, the 55-year-old victim was “conscious and cognizant and alert” when she arrived at the hospital.

The New York Post reported the victim looked “shaken as cops later escorted her home with her daughter.”

“She’s doing OK,” the daughter told The Post through the door of her mom’s apartment.

The suspect was arrested on the scene and taken to Bellevue Hospital for a psychiatric evaluation. Charges against him are pending.

A witness who filmed the aftermath of the attack wrote, “Can’t believe I actually witnessed an attack on an Asian lady right in front of me at the heart of NYC Chinatown,” Jin Zhen wrote on his IG story.

“When I saw the lady rolled over to the ground and went unconscious I quickly hung up on my food order and start recording the situation for evidence.”

Zhen said he flagged down police officers standing outside the 5th precinct and led them in the direction of the suspect. Restaurant workers followed the suspect until police apprehended him.