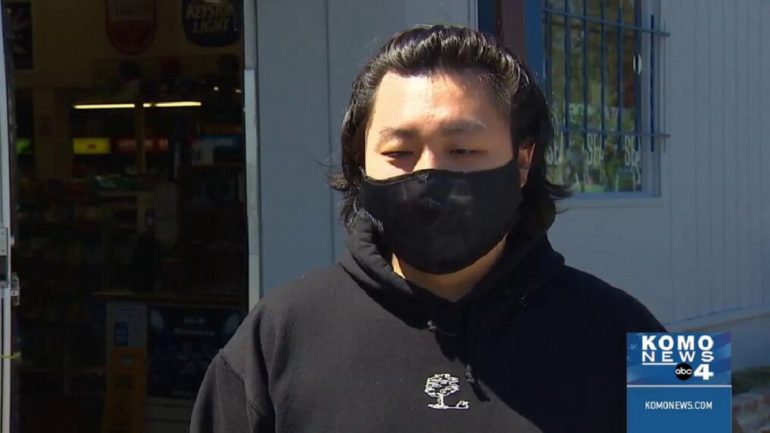 TACOMA, Washington—Authorities are searching for a suspect who stabbed a convenience store owner and his son because the suspect refused to wear a face mask.

33-year-old Jin Hyun said the confrontation with the suspect escalated quickly. “It angers me still,” Hyun stated. “At the same time, but because my dad and I are OK. We’re still here. That helps me to release that anger and move on.”

According to KOMO News, Hyun suffered stab wounds to his stomach after asking his attacker to wear a face mask in their store several times before the suspect responded with a vitriol of insults.

Hyun then escorted the suspect outside, which then caused the verbal confrontation to turn physical.

There is no description of the suspect.

“I reminded him, ‘Sir next time, you come into the store, have your mask on,’” Hyun stated. “And he came upset, pulled out his knife stabbed me.”

“The guy was just stabbing him, and I was trying to knock the guy over,” Hyun said. “I was screaming, ‘Someone help my dad!’ He’s bleeding. The crazy thing is he just walked away like nothing happened.”

When Hyun returned to work on Tuesday, he was overwhelmed by the number of notes, kind words, love, and support from the community.

The stabbing incident at Hyun’s convenience store was just one of many violent attacks in Tacoma over the last several weeks. On Friday night, there was a double shooting. On Sunday, two people were murdered in a shooting on South Tacoma Way.

“So, it’s a combination,” said Priscilla Lisicich, executive director of the group. “There’s weapons, depression and anxiety, and then also people not knowing how to manage their emotions and resolve conflict.”