SAN FRANCISCO, California—Patrick Thompson, 54, has been identified as the African-American suspect who brutally stabbed two Asian women on May 4. He is currently in police custody.

One Asian woman was 63-years-old and the second was 85-years-old. Both were waiting for the bus when they were attacked. Before paramedics arrived, sources told ABC7 one woman was badly bleeding and the other still had a knife in her arm.

One witness stated to KPIX5, “I saw brass knuckles at the end of it. Couldn’t tell you how long, because part of it was still in her.”

Thompson has been arrested more than two dozen times in the last 20 years. He was placed under a psychiatric hold at least once and was also arrested for battery in 2019, reports KPIX5.

Back in 2017, Thompson was arrested for stabbing a person at his homeless shelter on 5th and Bryant Streets with a pair of scissors. Authorities say the stabbing was unprovoked as well.

Family members of the 63-year-old victim wish to remain anonymous for the time being. However, the 85-year-old victim has been identified as Chui Fong Eng. Her grandson spoke with ABC7.

“She’s independent, very headstrong. If she has to do something she’s going to. That’s just her,” said her grandson, Drew, who requested we only use his first name.

“I was told the knife nicked her lung and ribcage. It was a really long knife,” said Drew.

She was rushed to the hospital with injuries life-threatening at the time with stab wounds in the arm and chest. After four hours of surgery, Drew stated the doctors told the family she was expected to survive.

Dozens of reporters, media outlets, and influencers were quick to describe the stabbing suspect as “white.” However, after images of Thompson began surfacing online—the racial description of the suspect completely disappeared overnight.

Thompson is booked on charges of attempted murder and elder abuse. No word if he will also be charged with a hate crime. 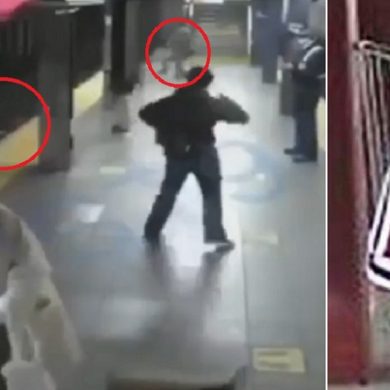 Woman Survives After Being Shoved Onto Tracks in Union Square