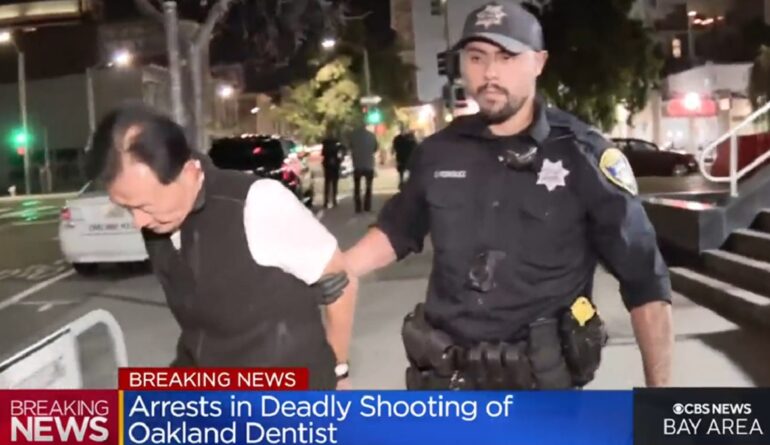 OAKLAND, CA—Two suspects have been arrested in the August Oakland slaying of Lili Xu, who was murdered as she sat in her car on a street in Little Saigon; the savage attack was captured on surveillance video.

Xu’s murder triggered outrage in the city which is currently suffering some of the worse crime rates in decades.

The announcement of the arrest was made early Friday morning. More details will be released at an afternoon press conference from Oakland Police Chief LeRonne L. Armstrong and Alameda County District Attorney Nancy O’Malley, according to CBS Bay Area.

Xu was attacked Sunday afternoon August 21 near the intersection of East 11th St. and Fifth Avenue in the city’s Little Saigon neighborhood a little after 2 p.m.

The 56-year-old dentist who worked at the Pacific Renaissance Center on 9th Street in Oakland pulled into a parking spot with her Mercedes Benz sedan. The suspect vehicle, an older model white Lexus sedan, pulls up alongside Xu’s parked car.

Video captures a suspect getting out of the white Lexus and going around the Mercedes Benz to the passenger side where the suspect apparently demanded the victim’s purse. Screams can be heard followed by the sound of three gunshots.

Footage also revealed that the suspect vehicle was parked a short distance away on Fifth Avenue, laying in wait for 30-45 minutes before the attempted robbery.