Child Victim Blamed for Being Bullied at Sky Zone 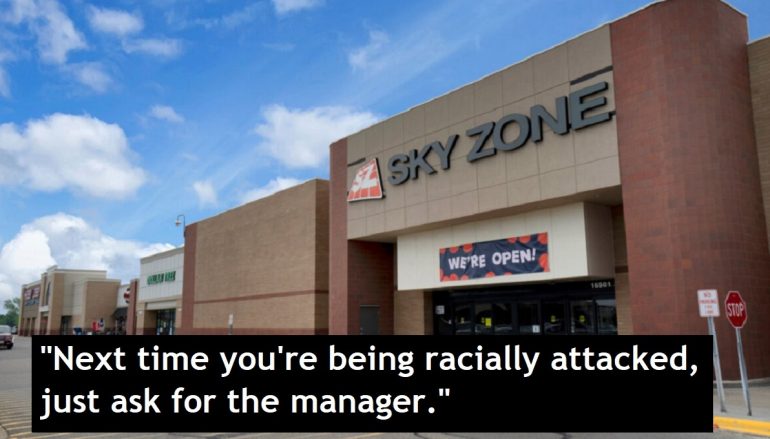 This story comes from a friend of the victim who recently posted the story on their Facebook page. These are their words.

“Speaking for a friend because she’s tired and feeling defeated.”

The incident took place at an amusement center in Maple Grove, Minnesota. On Google, the establishment is described as a chain of indoor trampoline parks featuring freestyle bouncing, dodgeball, fitness programs and more.

“Last Saturday, a sibling of one of our students was racially attacked at Sky Zone Maple Grove. This 10 year old child was cornered, slapped, choked, body slammed, told to go back to China (he’s born here and not Chinese), and screamed at why he brought the Chinese flu here. As terror and confusion overtook this 10 year old child, he screamed for help from bystander parents who witnessed the assault. Employees were present and witnessed the assault as well. No one helped. Feeling defeated, confused and scared, he finally broke down in tears. Eventually, a parent walked by and interrupted the attack.

We have to do better as humans. For the parents and employees who witnessed the assault and did nothing, I hope you can find courage next time. I hope you can find some humanness in you as a person and as a parent to interrupt hate. I also hope this never happens to your child/children.

The cameras caught the entire incident. Management placed the blame back on the child and informed him that he should’ve asked for a manager for help. So folks, if your child is choked, slapped, body slammed, and racially attacked, SkyZone Maple Grove says you should ask for a manager. The police were involved, but since the attacker is under age, nothing can be done. Sky Zone said that they’ll “write a report.”

To my friend, you are not alone. You have an entire community who hears you and will support you and your family.

This happened in the Maple Grove Community. If you’re not okay with this, please don’t remain silent. Let Sky Zone know that they are wrong. Let them know that racial attacks are not okay. Oh, they know we don’t stand for this foolishness, so they have deactivated their FB reviews option.”