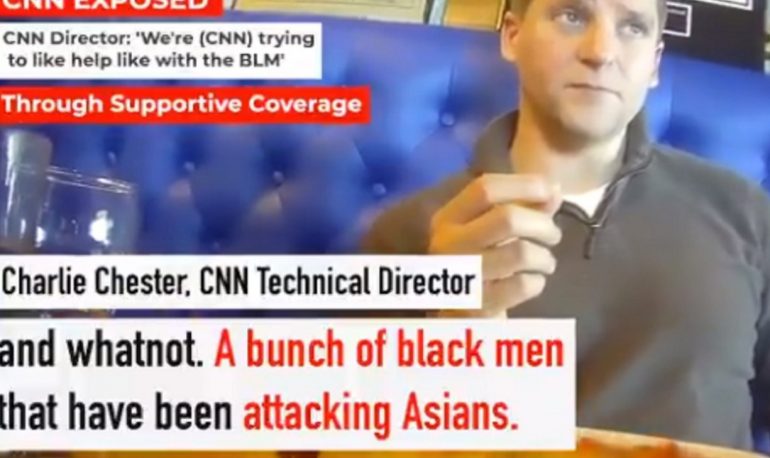 In a bombshell revelation, an undercover video shows CNN Director Charlie Chester admitting he wanted to help Black Lives Matter by protecting their narrative on race.

Chester admitted while researching Asian hate, they found that nearly all of the major attacks were perpetrated by African-American males to his Tinder date, which happened to be an undercover reporter for Project Veritas.

Many view Project Veritas as a fringe news outlet, however, video footage does not lie. What Chester says is as clear as day.

“I was trying to do some research on the Asian hate, like the people [who] are getting attacked and whatnot. A bunch of black men have been attacking Asians. I’m like ‘What are you doing? Like, we [CNN] are trying to help BLM,'” Chester stated.

Chester continued on to state, “The optics of that are not good. These [are] little things that are enough to set back movements, because the far left will start to latch on and create stories like ‘criminalizing an entire people,’ you know, just easier headlines that way, I guess.”

As he continues to talk to his “Tinder date,” Chester made clear he only wanted to cover up stories on Asian hate that involved white people to help the Black Lives Matter narrative that they are the righteous good guys and Black-on-Asian violence is a myth.

“I haven’t seen anything about focusing on the color of people’s skin that aren’t white. They [CNN] just aren’t saying anything. You know what I mean?”

“You can shape an entire people’s perception about anything [depending] on how you do it,” Chester said.

It should also be noted on Wednesday night, a CNN crew was attacked and chased out of Brooklyn Center by Black Lives Matter.

American Citizen Loses Appeal in China and Will Be Executed

Liberal institutions like Harvard University states Asians lack “courage”, “leadership”, “likeability.” All of which are lies because how can a group of people who lack “courage” and “leadership” consistently destroy its competitors? Yet, CNN backs this narrative with their reporting.

This is why the United State of America has no future. Diversity is America’s greatest weakness and the most diverse companies have been consistently defeated by pure-blood Asian-owned companies. This is why the so-called American tech giants from Intel, Apple to the former Big 3 (Ford, GM, Chrysler) have been at the mercy of Asian innovation.

Asian homogeneity is the greatest enemy to progressivism because it proves their theories of diversity being superior completely false.