EAGLE ROCK, California—A 70-year-old woman was viciously beaten on a Metro bus on her way to Vons to go grocery shopping for her granddaughter late last week when she was allegedly mistaken for an Asian woman, according to her son.

A fellow passenger—described as a Black woman between the age of 20 to 30—called the elderly woman anti-Asian racial slurs before violently attacking her. However, the woman is Mexican-American and a longtime resident of Highland Park. She is often mistaken for Asian, according to her son.

The assailant was later identified as 23-year-old Yasmine Beasley.

Police confirmed there has been an arrest in the case but have not yet released details about the incident.

The victim’s face and eyes were left severely swollen, her nose was broken, her hair was pulled out of her head, and she suffered a concussion, according to The Eastsider.

Her son, who only wants to be identified as Pete provided photos of the aftermath.

The victim, who only wants to be identified as Becky, was dragged from the back of the bus to the front by the perpetrator, reports The Eastsider.

“Nobody would help. Not even the bus driver,” Pete explained.

The attack only ended when a passenger called 911. The suspect was later arrested on another bus after police used a bulletin, according to Pete.

The elderly victim was held in the hospital for 24 hours before being released. Her son said she has difficulty walking. Her leg was badly bruised during the incident, compounding her preexisting condition of lupus arthritis and other disabilities, according to The Eastsider. 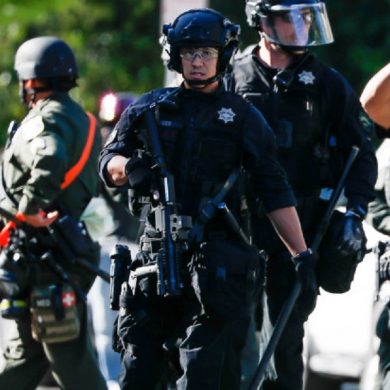