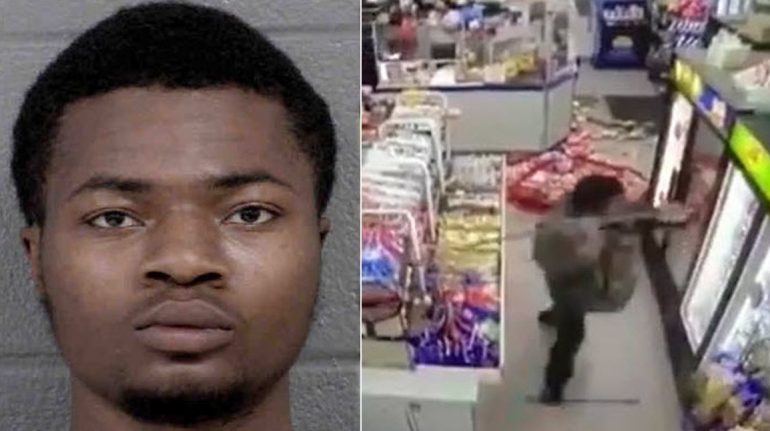 CHARLOTTE, North Carolina—On Tuesday, March 30, 24-year-old Xavier Woody-Silas, nearly destroyed the Plaza Sundries convenience store and ransacked whatever he could in under a minute.

The Korean-owned business told Fox46 that they’ve had more than enough cases of vandalism at their establishment to know they shouldn’t get in the way of the attacker. This particular case was more disturbing than most because Silas made his way up and down the aisle, destroying everything he could, screamed racial slurs, and was even egged on and cheered by another African-American customer.

“He just went down the aisles, breaking everything he could,” Mark Sung said told Fox46.

Mark Sung is the owner’s son and depressingly, he explained this was not the first time the store has been vandalized. “It happens pretty often…at least once a year,” he stated.

Plaza Sundries has been in business for nearly 20 years and the family stated there is no doubt they were targeted because they were Asian.

The recent video that went viral had no sound. But Sung explained Silas screamed, “Go back to your country, you Chinese motherf*****s!”

Towards the end of the attack, a friend of Silas kept egging him on while looking at Sung’s parents and repeatedly saying, “That’s what you get.”

Sung’s parents immigrated to North Carolina from South Korea and built a life from nothing a few decades ago. Sung told Fox46 that he was born in Charlotte, North Carolina.

Xavier Wood-Silas has an extensive police record. This is his eighth arrest in Mecklenburg County in the last two years and his third arrest this year, so far.

“On March 30, 2021 a violent incident occurred at Plaza Sundries in the Charlotte Transportation Center (CTC) causing extensive damage to the business. The suspect involved in the incident, Mr. Xavier Rashee Woody-Silas, was immediately arrested by G4S Company Police and received the following charges:

The suspect has also been banned from all CATS facilities and services.

CATS has verified that G4S has increased officer presence at the CTC. CATS strongly condemns any act of racism or violence and will continue to prioritize the safety of everyone.”