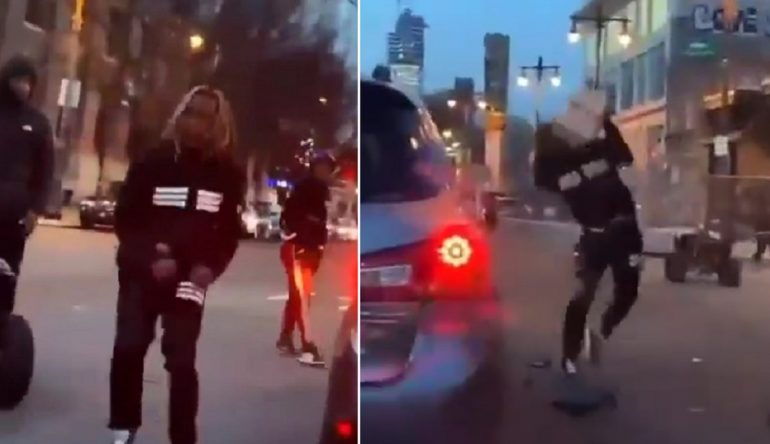 PHILADELPHIA, Pennsylvania—Police have made an arrest after a video showing a violent encounter with a motorist earlier this week surfaced online, reported ABC 6.

The video shows an ATV rider assaulting an Asian motorist and then running back to his ATV to retrieve a gun. Someone urged the gunman to put it down. He did but continued terrorizing the victim with help from the rest of the group.

The altercation reportedly started when a group of ATV riders stopped short in traffic, causing the vehicle behind them to hit one of the bikes.

According to a police report, the victim got out of his vehicle to see if the operator of the motorcycle was injured. The male on the bike became hostile and demanded payment for the damages, according to ABC 6.

The other motorcycles surrounded the victim’s car while the operator of the motorcycle began assaulting him. The victim was able to get back into his vehicle and lock the doors.

However, the assault continued. The ATV riders surrounded the vehicle throwing cinder blocks and trash, seriously damaging the car.

On Thursday night, police say they have taken the suspect into custody. He has not been formally charged.

“Like most, I was both shocked and sickened by the utter lawlessness I saw in that video,” said Police Commissioner Danielle Outlaw. “The individual responsible is in custody, and I want to thank our detectives for their quick work in identifying the suspect. I also wish a speedy and full recovery to the victims of this senseless assault.”

“I don’t like it whatsoever. It’s sickening,” said Charlotte Haley of North Philadelphia. “If you’re going to ride your dirt bike, ride it in Fairmount Park somewhere.”

Parrie Brooks of East Falls agrees, saying, “The level of noise is frightening for a senior citizen.”

Owning ATVs and dirtbikes is legal, but driving them on city streets is illegal.

Philadelphia police have a policy where they cannot give chase unless there is a major threat to the public.

Traffic tickets with heavy fines and confiscation of vehicles are the current penalties, officials say.