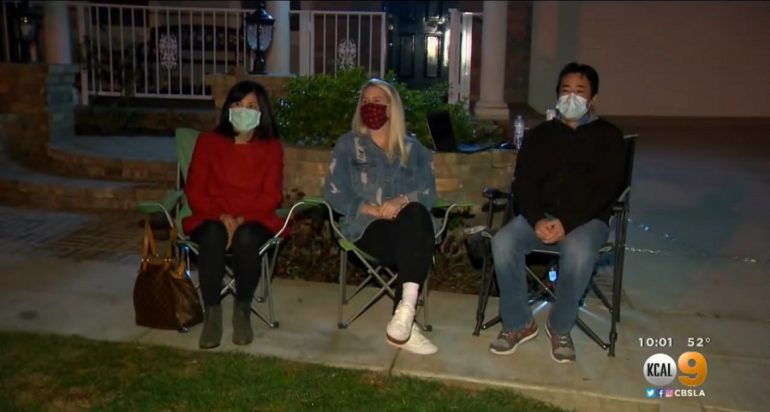 LADERA RANCH, California—Every night, neighbors take shifts protecting a local Asian-American family that has been harassed by a group of teens, according to KCAL 9 News.

Ring camera footage shows teens running up to Haijun Si’s home in Ladera Ranch, pounding on the door and at times flashing light in the camera to prevent them from being identified.

One child left a pornographic print at Si’s front door, and Si says others have thrown rocks and hurled racial insults at his family.

“We have called the sheriff many times. The sheriff has come here seven times,” Si said.

Detectives stepped up patrols and told Si to install cameras and a fence, but still, the attacks continued, reports KCAL 9 News.

Others neighbors decided to setup camp in front of Si’s house to deter the harassment.

Neighbors keep watch in shifts, standing guard to protect Si and his family, and now they’re finally experiencing some peace.

“I am very thankful for my neighbors. We have five peaceful nights, no one knocking on the door. I don’t need to keep watching,” Si said.

The way the neighbors have arranged it is that every night, they sign up online through their community Facebook to sit outside and monitor the home.

So far, the attackers have not been back but they turn the other way when they see the house guarded, neighbors say.

“We have seen multiple attempts already for the teenagers that have come this way. They see us and they turn around. Will this make them stop forever? Probably not. But at least this family can have some peace,” said one neighbor.

Si said he doesn’t understand why he is being targeted, but he’s just grateful his neighbors have his back.

Authorities said they will be looking at home security footage to try to identify the people who’ve been harassing Si’s family.