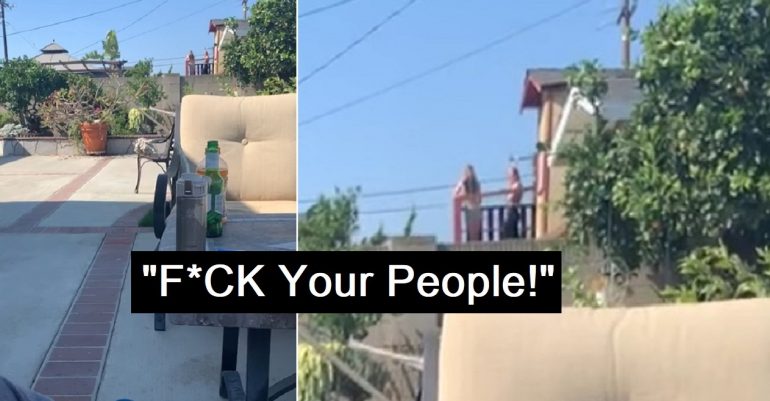 This story has come to light via Facebook user Nancy Nguyen who uploaded video footage and explained the context of the situation. The incident is a daily occurrence, but the video footage was taken a few weeks ago.

Nancy starts off by saying “I’m not quite sure how to go about all this. A few weeks ago this situation happened between my neighbors down the street that left me shock and kinda furious.”

The neighborhood in question is Little Saigon, Garden Grove (OC) in Southern California. A Vietnamese couple with three young children purchased the home back in March of this year, down the street from Nancy’s house.

“I recently found out from my neighbor that the Vietnamese family and their next door neighbor have been having this on going drama for the past few months. I am rarely home and when I am I’m usually inside, so I have never witnessed it for myself. Sometime two weeks ago me and my boyfriend were standing outside and we witness the white man and his girlfriend verbally attacking the Vietnamese lady.”

“My boyfriend then tells the guy to calm down and to stop harassing the lady. The guy and his girlfriend then turn to us and start trying to harass us saying “your people this, your people that”.  I quickly realize that it was not a neighborhood issue but a race issue. The man then tries to come up and attack us which he later got pulled back by his girlfriend. Moments later when the situation was deescalated, we had went over to see if the Vietnamese lady was okay.”

“She had informed us that this has been going on EVERY DAY since they moved in. That the white family would harass her and her family every day, the moment that they come home. They literally come out of their house when the Vietnamese family pulls up into the driveway. Giving them the middle finger and saying stuff like ‘Asians are stupid’ ‘f*ck your people’ ‘go back home, no one wants you here’ ‘our people are above your people,’ etc.”

Nancy continues to explain, “She LITERALLY broke down into tears telling us “I don’t know why they hate us. We did nothing to them and they harass me because I don’t speak English very well”. It just broke my heart because that could be my parents, since they speak broken English. She told me that she doesn’t feel at ease sleeping at night because of this family, which makes it more heart breaking. You work hard to buy a house, to have it be your worse nightmare because of your neighbor.”

“Today I got a call from the Vietnamese lady telling me that the cops were called and that they might need to come over and talk to us. After the cops had left I had went over there to talk to her to see if she was okay; she and her husband had showed me and my friend countless videos of the white neighbor’s 16 years old daughter and her friend harassing the couple as they were trying to enjoy breakfast in their own backyard.”

“I’ve attached a video from this morning to show you. The Vietnamese couple is literally saying NOTHING back to them, and they’re just looking into their yard saying all these false comments and being just straight up rude to this couple for no reason. The second video is the man coming up to me and the boyfriend trying to fight us. Thankfully the lady had it on camera.”

“And just putting it out there, I’m not being biased, but I have literally talk to people in this neighborhood and they have told me that it is not the Vietnamese couple that started anything, that it is the white neighbors. That he literally told the previous house owner to not sell the house to an Asian family.”

“The Vietnamese people have called the cops several times and every time the cops tell them that until there is a physical threat or harm that there is nothing they can do. The man says that he is going to look into getting a restraining order against the family, but it suck because this white family is literally their neighbor.”

“I’m just shocked because how are you going to be racist to Asians when you live right next to Little Saigon. When only three houses down this whole street are occupied by a white family, every other house down this street is occupied by Asian residences.”