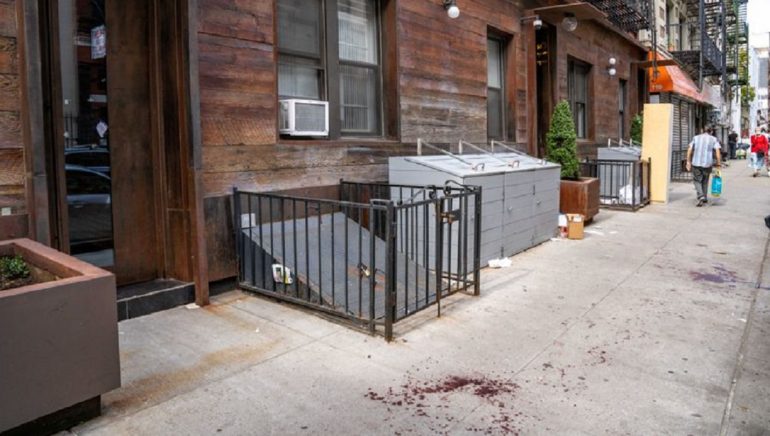 LOWER MANHATTAN, New York—Saturday morning, around 2:45 am, October 10, a 20-year-old man was hanging out with four other friends when he began urinating on a wall on Elizabeth St. near Grand St., according to the Daily News.

An Asian man poked his head out of a window in the building and yelled at the urinating man to stop. Within minutes, the Asian man, identified as Maximilian Ong exited the building with a friend—one wielding a sword and the other brass knuckles, according to police.

The Asia duo hacked at the victim—slashing a rib and chopping his left forearm so deeply, the blade touched bone and damaged tendons, according to the Daily News.

The victim tried grabbing the blade and ended up severely cutting his fingers on his right hand as well. Once medics arrived, they immediately transferred him to Bellevue Hospital.

Police arrested one of the two alleged attackers, however, recovered no weapons. Ong was arraigned Sunday on felony assault and weapon possession charges and released on $20,000 cash bail.

According to Daniel Gotlin, Ong’s attorney, the victims are described as a group of drunken bullies who yelled racial slurs at Ong and attacked him. Gotlin vehemently asserted that Ong didn’t cause the victim’s injuries as well.

Ong’s mother owns the building and he manages it, Gotlin explained.

“They decided that Chinatown looks like a urinal, so he’s gonna pee on the building,” Gotlin stated. “He was called a ‘ch*nk’ and they used other racial (slurs). They jumped my client when he kept insisting that he can’t do this.”

“They were drunken kids that were using racial epithets against Chinese, which is all too common during this pandemic,” Gotlin added.

As for Ong’s friend, Gotlin stated that person was not a friend and was actually some random individual who showed up and helped Ong. Gotlin wouldn’t elaborate any further.