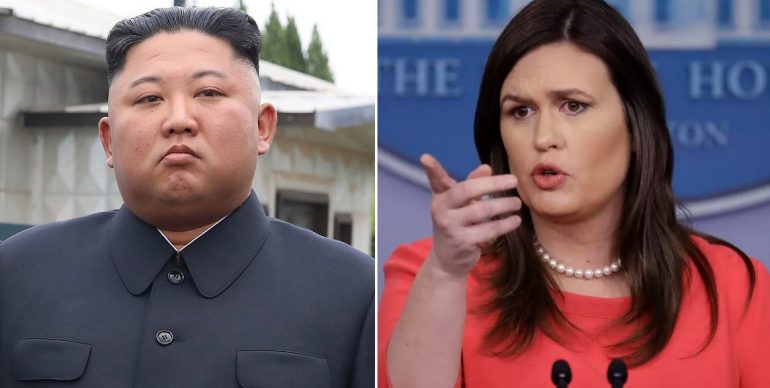 Former Press Secretary Sarah Sanders reveals in her new book, “Speaking for Myself” Trump jokingly told her that she would need to “take one for the team” after Kim Jong-un “winked” at her during the 2018 Singapore summit, according to The Guardian.

“We made direct eye contact and Kim nodded and appeared to wink at me. I was stunned. I quickly looked down and continued taking notes,” Sanders described in her upcoming book, which hits shelves next Tuesday, September 8.

After the meeting, Sanders relayed the incident to Trump and then-Chief of Staff John Kelly as they were on their way to the airport.

Sanders said Trump and Kelly both “howled with laughter” in the car.

Trump then jokingly said “Well, Sarah, that settles it. You’re going to North Korea and taking one for the team! Your husband and kids will miss you, but you’ll be a hero to your country!”

Many netizens commenting on this story, which was first reported by The Guardian, articulated that even if Sanders were to go ahead and fly to North Korea, the act wouldn’t make her a hero and found Trump’s joke “disgusting.”

However, let’s not forget in 2019 former San Francisco Mayor Willie Brown sent a letter to the San Francisco Chronicle and acknowledged giving Kamala Harris her appointments that started her political career because of their sexual relationship.

According to USA Today, Brown appointed Harris to the California Unemployment Insurance Appeals Board and then to the Medical Assistance Commission—positions that both made her more than $400,000 over a five year period. Brown also gave Harris a BMW.