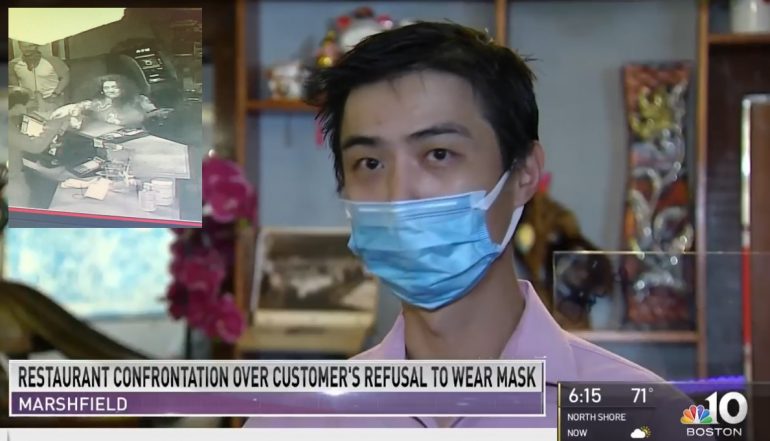 On Wednesday night, August 26, a group of five people walked into a Chinese restaurant in Marshfield, Massachusetts, called Ming Dynasty. The group wanted to be served alcohol, however, owners Lei Monica Yan and James Tian refused to serve them as they all appeared drunk and were not wearing face masks, according to NBC10 Boston.

“This woman and her friends refused to leave, refused to wear their masks, keep telling people her husband is a very important person. God is watching,” Yan wrote on her Facebook page. “Me and my husband doesn’t deserve this.”

According to the owners, one of the customers waved his ID around and shouted he could do whatever he wanted. Marshfield police later confirmed that a man involved is a Quincy police officer.

“Two of the five, a man and a woman, were belligerent, refused to put masks on,” Marshfield Police Chief Phillip Tavares stated.

The off-duty police officer can be heard in the surveillance footage saying, “I don’t need a badge.”

“He even told me he could easily destroy me, easily destroy my business,” Yan stated to NBC10 Boston. In surveillance footage, the woman in the party of five can be seen vandalizing the Plexiglas barriers at the counter. However, the owners don’t want to press charges.

“I don’t want him [to] get in trouble, I want him serious about who he is,” Yan stated.

The Quincy Police Department confirmed on Friday that they are aware of the incident at the Ming Dynasty and are conducting an internal investigation to determine the disciplinary action needed for the off-duty police officer.