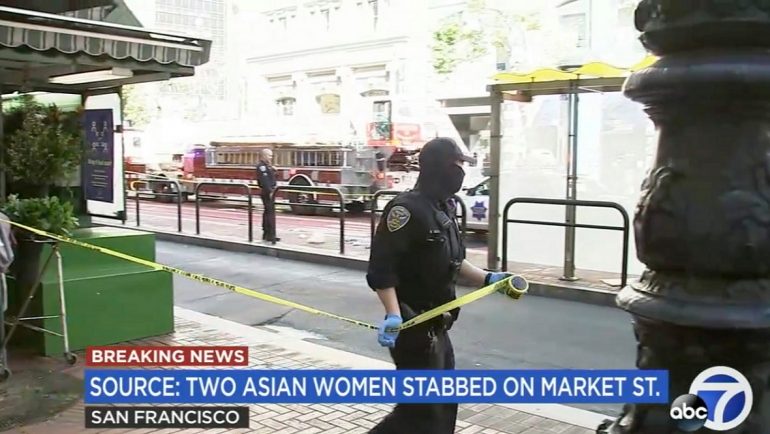 SAN FRANCISCO, California—Police have arrested a 55-year-old African-American male around 7 p.m. for the vicious knife attack of two Asian women in broad daylight in downtown San Francisco earlier this afternoon, according to ABC7.

The attack happened at 4th and Market streets.

Patricia Lee witnessed the incident and stated to ABC7, “I saw a man walking right next to me while I was getting some water and I noticed a knife on his right hand. It was a pretty big knife, he got knuckles on the handle and the blades have holes in there—like a military knife. And he walked towards the Muni platform.”

Lee continued to state the attacker “sliced” the women.

One Asian woman was 65-years-old and the second was 85-years-old. Both were waiting for the bus when they were attacked. Before paramedics arrived, sources told ABC7 one woman was badly bleeding and the other still had a knife in her arm.

“One of the women, 85 year old, is currently in surgery at SF General. Please think of her and her family. I will share updates as I receive them. Nothing more sickening than stabbing an 85 year old woman while she waits for the bus. Horrific. #StopAsianHate.”

SFPD stated a motive is unclear at this time and they have no evidence this was a hate crime, but have not ruled it out, according to ABC7.

Violence toward the Asian community at the hands of the African-American community has reached biblical proportions. If these attacks were the other way around, the entire country would be in flames. This is largely due to weak and incoherent leadership in the Oval Office and incompetent leadership at the state and city level, i.e. San Francisco Mayor London Breed and District Attorney Chesa Boudin.