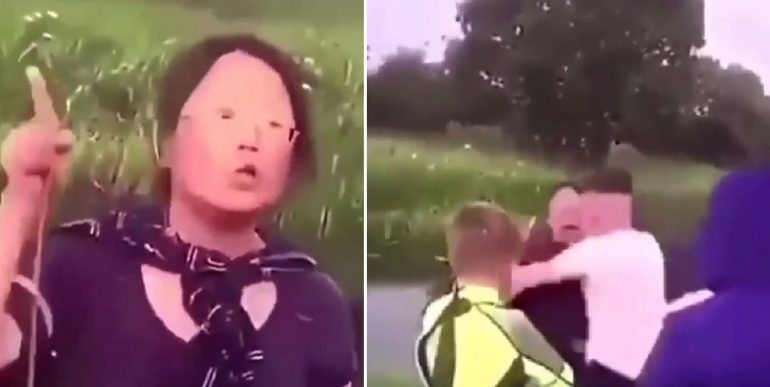 Gardaí (Irish National Police Service) are investigating a viral video that showed a Chinese woman, now identified as Xuedan (Shelly) Xiong being pushed into the Royal Canal while walking near Ashtown in Dublin on Friday evening, August 14.

Xiong was walking between Castleknock and Ashtown around 7 pm when the first group of teenage boys shouted racial slurs at her and rushed her with their bikes. She felt they wanted to try to ram her into the canal. “I screamed and they laughed and then imitated my scream. They left me terrified.”

A few minutes later a second group of boys passed by. “One of them looked me straight in the eyes and said ‘coronavirus,’” Ms. Xiong stated to the Irish Times. “I didn’t say anything, I was stunned and they winked at each other.”

A third group of teenage boys, consisting of some boys from the previous encounter cycled back and started shouting “Chinese noodles” and “fried noodles” at Xiong. She ran after the boys until she caught up with the group, which now included some older teenagers.

“I told them it was racial discrimination to speak like that. I wasn’t frightened anymore, all I felt was anger. There were lots of lone women walking along the canal at that time but they targeted me. I think there’s a reason behind that.”

A video posted on TikTok showed two members of the group pushing Ms. Xiong into the canal. Earlier reports of the video surfacing from Snapchat were wrong, according to the Irish Times. The video on TikTok has since been removed.

Xiong was not physically injured from the incident and was able to swim her way back onto the trail. The boys ran off. Three people passing by stopped and helped Xiong while she called gardaí to report the incident.

“We could still see the group of young men, they were about 200 meters [650 ft.] away. Without those three kind of people who stopped I’m pretty sure they would have come back and pushed me again.”

Ms. Xiong waited around for 10 minutes for Garda to arrive but decided to go home and change clothes because she was soaking wet. She later went to the local station to make a formal report, however, gardaí told her it’s unlikely they’ll find the teenagers involved.

“The Garda asked if I had phone numbers for any witnesses. I had asked the people by the canal to be witnesses for when the Garda arrived but I didn’t think to ask for their numbers. I was too upset by what had happened. His question made me feel like I needed to have complete dossier prepared before reporting to the gardaí.

I understand the gardaí are busy because they’re under-resourced but I believe if I’d arrived in with a broken leg they would have treated me differently. I was still hurt. But he made it sound like nothing could be done,” Xiong explained.

The Irish Times was told by a Garda spokesman that an investigation of “an alleged racially motivated incident” was underway.

“An Garda Síochána takes hate crime seriously and each and every hate crime reported to us is professionally investigated and victims supported during the criminal justice process,” he stated, adding that gardaí were taking actions to “improve internal recording and encourage more reporting by the public.”

“The Garda Diversity and Integration Strategy 2019 – 2021 has a significant focus on enhancing the identification, reporting, investigation and prosecution of hate crimes,” he continued.

Unfortunately, racial abuse isn’t a new occurrence for Ms. Xiong who lived in Ireland for 14 years and has a 10-year-old son. She purposely avoids large teenage groups because she has suffered verbal abuse in the past. This time, however, Xiong decided to confront the abuse.