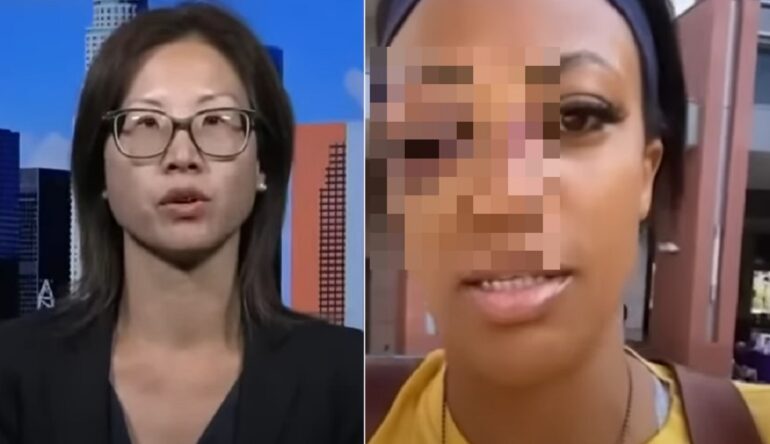 LOS ANGELES, CA—A former deputy district attorney in Los Angeles, who was actually attacked by the same African-American male suspect who assaulted Olympian Kim Glass, warned the “writing was on the wall” since the suspect is a repeat offender.

Irene Lee was attacked by 51-year-old Semeon Tesfamariam back in 2020 and told FOX News that Glass’ attack was “entirely predictable and preventable.”

“When I was attacked, he was already on three grants of felony probation,” Lee said on America’s Newsroom on Monday. “He had attacked three women, two of them with a golf club and a hammer, and he threatened to harm them. And another incident that was about a year prior to my attack where he had gone after a young woman with a metal pipe and struck her numerous times causing injuries.”

“I believe that there were enough red flags before the court to say… he can’t be out there on the streets,” Lee continued. “He’s a danger, and so I believe that the writing was on the wall.”

Former volleyball Olympian Kim Glass was attacked in Los Angeles in broad daylight earlier this month with a metal bolt.

Tesfamariam faces up to 11 years behind bars and was out on parole at the time of the attack, according to FOX News. The 51-year-old suspect was convicted of felonies in 2018 and 2019.

“We have to restore the balance for victims in our system,” Lee added. “There are so many law-abiding citizens in our society. Most of us follow the rules, and we trust and live by faith that they’re going to be implemented fairly and justly.”

“Unfortunately, right now, at this time, there’s a climate of preferential treatment for violent offenders over that of law-abiding citizens,” she continued.

Los Angeles County DA George Gascon plans to end the “Lifer Unit,” which is the department responsible for notifying victims of information pertaining to their assailants’ parole hearings, by the end of 2022, reports FOX News.

“There’s just this climate, this feeling that people will get off without any real consequence and that people are focusing on the violent criminals over the victims who are being daily victimized, who don’t have a platform to speak out like Kim does, or now that I do,” Lee said. “And there is just this climate and this fear that’s out there on the streets.”