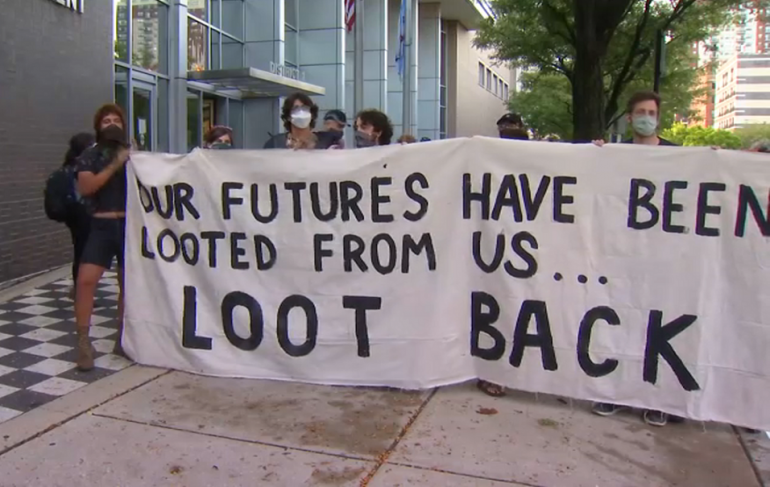 Black Lives Matter Chicago chapter rallied outside a South Loop police station where many looters were being held after being arrested for looting the last few days in Chicago.

Simultaneously, the group released a statement addressing the response from city leaders during the unrest.

“In a predictable and unfortunate move, [Mayor Lori Lightfoot] did not take this time to criticize her officers for shooting yet another Black man. Lightfoot instead spent her time attacking ‘looters,'” the group’s statement read. “The mayor clearly has not learned anything since May, and she would be wise to understand that the people will keep rising up until the CPD is abolished and our Black communities are fully invested in.”

“Black lives are and always will be more important than downtown corporations,” the statement continues. “These corporations have ‘looted’ more from our communities than a few protesters ever could, yet the Mayor reserves her anger for the latter.”

Black Lives Matter organizer, Ariel Atkins stated “That is reparations. Anything they want to take, take it, these businesses have insurance.” Asian-Americans had nothing to do with slavery in America. What reparations do we owe?

36-year-old Terry Te dodged a bullet on Monday at 3:15 am when he got the call someone was trying to breaking into his jewelry store in downtown Chicago. He grabbed his gun and bulletproof vest and rushed to his store. What he saw was absolute chaos. Windows being shattered, other stores being looted. Te was able to save his inventory and clean up the mess left behind by looters. “I’m almost ready to move to find a much quieter location in a less violent city,” Te stated to the Wall Street Journal. “It’s basically a lawless land.”

“Over the past few months, too many people — disproportionately Black and Brown — have lost their jobs, lost their income, lost their homes, and lost their lives as the city has done nothing and the Chicago elite have profited,” the statement reads. “When protesters attack high-end retail stores that are owned by the wealthy and service the wealthy, that is not ‘our’ city and has never been meant for us. The mayor cannot expect people to play by her rules as she refuses to treat them with basic dignity. These protests can only end when the safety and wellbeing of our communities is finally prioritized.”

Ex-UC Irvine Student Throws Mom Off Building, Then Jumps to His Death

Police believe the looting began after officers shot an African-American man in the Englewood neighborhood Sunday afternoon. Police stated 20-year-old Latrell Allen had a gun and fired at police before they returned fire, striking and wounding Allen.

Black Lives Matter are criticizing the police narrative. They believe the police are lying about what happened because none of them had body cameras.