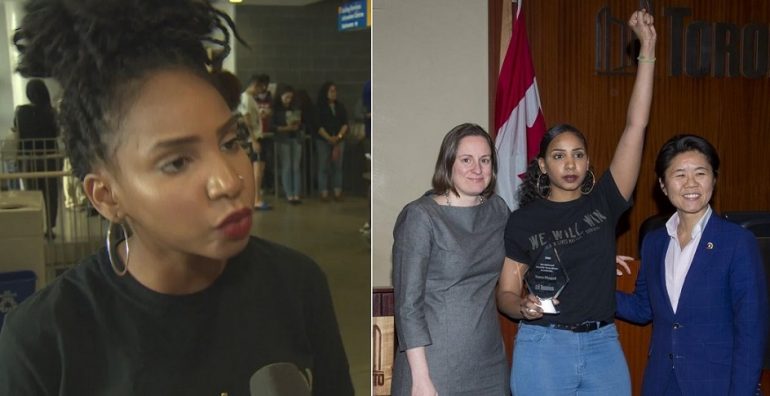 A Facebook post has resurfaced from Toronto-based Black Lives Matter co-founder Yusra Khogali stating white people are “sub-human” an“inferior race,” “recessive genetic defects,” and they should be “wiped out.”

Asian-Americans have also been experiencing this type of Nazistic ideology from members of Black Lives Matter throughout the United States. An Instagram user recounts her story, which took place back in June in Downtown LA near a BLM rally. These are her words.

“I walked out into the parking lot after buying groceries in Downtown LA and noticed two African-Americans, one male and one female standing behind my car, both wearing Black Lives Matter T-shirts and shaking their heads. I drive a 2019 Lexus LC 500 and I proudly put a sticker on the back window of the Japanese flag because it’s a Japanese car and I’m half Japanese.

They told me ‘Asian pride is more dangerous than white supremacy and I should check myself.’ I didn’t know what to say, I was so confused. The African-American gentleman told me to take that ‘insidious flag’ off and Japanese cars wouldn’t be possible without African-American innovations. They said they wouldn’t be responsible if I was physically attacked by BLM protestors nearby for being so overtly racist. They then both walked away, got into their BMW, which is a German car and they’re supporting white supremacy? And drove off.”

Earlier in the week, Black Lives Matter supporters gathered in front of Fremont Mayor Lily Mei’s house to demand police defunding and chalked “Asian Silence is Violence” on the road in front of her house.

More and more incidents are popping up between Asian-Americans and members of Black Lives Matter. Some Asian-Americans explained to Asian Dawn they marched with Black Lives Matter but ended up leaving the movement because of the racism they faced. From “Eating dog” jokes to an Asian couple who stated “Some dudes kept hitting on my girl and kept asking her in front of me ‘He gotta small dick, huh? Girl, what’s up? What’s your name?’” The couple felt so uncomfortable, they ended up leaving the march.

Feature Images via CBC & The Star