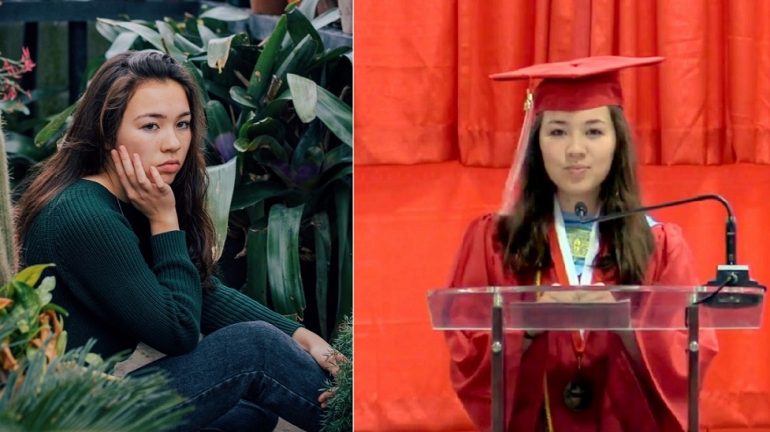 Francine “Frannie” Newman gave a speech last Friday night (actually recorded earlier in June) as valedictorian of Saranac High School in northern New York state. Newman very plainly spoke about the racism she faced from classmates and teachers for being Asian. She brought up nicknames given to her as far back as her daycare days. The kids would nickname her and her brother “Fortune Cookie” and “Eggroll,“ according to Adirondack Daily Enterprise.

“I don’t mind the race jokes. I don’t have a single friend who hasn’t made one, and I’m guilty too. I know there’s not a lot of diversity in the area, and I know that no one has ever intended to hurt me with what they say; there’s a lack of education and understanding, and it is not the fault of anyone living here. Knowing this, and growing up knowing this, did not make any of it hurt any less.”

Newman continued to explain her situation got worse once she reached second grade and had to switch to a different elementary school in Saranac Lake after her other school closed down.

“They tugged at the sides of their eyes and said they couldn’t have me over to their houses because I would eat their dogs. It seems so insignificant now, but in the mind of a second-grader? I cried openly in front of a class full of entirely new people, and was pulled aside afterwards and told that I needed to toughen up — that kids will be kids, and that it was all jokes, and that I was being sensitive, and that I wasn’t going to make friends this way. And so I did. I toughened up. I began to make the jokes before other people could.

I began to respond to the new nicknames the kids on the back of the bus gave me. Gone were the days of ‘Fortune Cookie,’ replaced instead with ‘Chink,’ ‘Ling Ling,’ ‘China’ and ‘Squinty Eyes.’ These were trying times. Sink or swim. I wanted the friends and I didn’t care how I got them, even if I felt myself growing to hate the way I looked as much as it seemed everyone else did.”

Newman continued to explain as she got older “I began to resent my culture, resent my own mother, for making me look this way.”

“Adults in my life have played just as large a role in reinforcing my self-loathing as kids have. In third grade I was given to the wrong parent at the end of a field trip, because the parent was Asian, with the excuse, ‘You all just look the same.’ In eighth grade a classmate was asked by the teacher, ‘In this room, who is going to get into college first?’ and was forced to choose Jackson and myself, seeing as we were the ethnic minorities. We were told that we were lucky to not be white, even though in that moment I would have given anything to blend in with the rest of the class, would have given anything to think that my future accomplishments would be based on merit and not on race.

Today, standing before you, I can finally say that I am proud — proud of everything I have done, proud of where I am heading in the fall (Middlebury College in Vermont), proud of what I look like, proud of my heritage and proud of my mom.

I am thankful for the person I was forced to become, and I am thankful that one day I will have the opportunity to teach my own kids about their culture and about acceptance. My only regret leaving high school is not having had these revelations sooner.”

Newman did end the speech on a positive note. She thanked friends, parents, classmates, and teachers, “I am so thankful to have been a part of this class.”

“Over these four years, we’ve all found self-acceptance, and we’ve all grown into the people we were meant to become.”