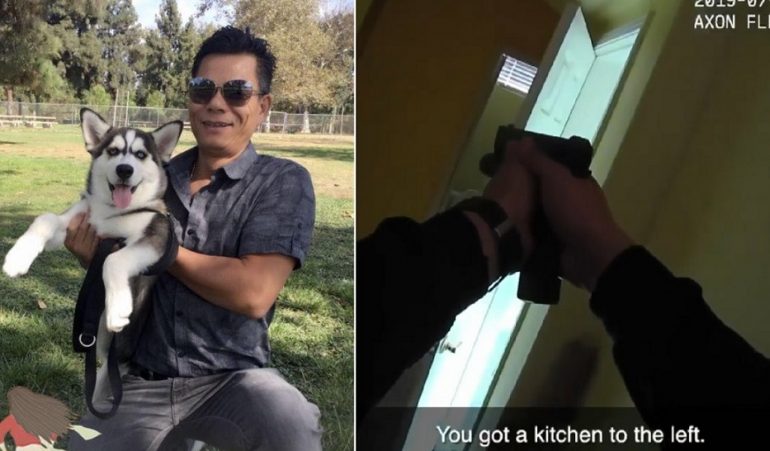 It’s been nearly a year since Chinese immigrant Li Xi Wang, 49 was shot and killed by Chino police during a marijuana growhouse raid on July 3, 2019. According to a family attorney, Wang didn’t speak English and couldn’t understand police commands.

The incident started off when police raided a house in Chino, California on suspicion of drug trafficking and grand theft of electricity. The house ended up being a marijuana grow operation and police almost immediately arrested 53-year-old Ai Yue Cai upon arrival.

Police arresting Cai asked her if there was anyone else inside the house. She shook her head no, according to KTLA 5.

Police then made their way upstairs and discovered Wang hiding behind a door. A police officer immediately commanded Wang “Let me see your hands, dude!” Regardless if Wang could speak English or not, the police officer immediately shot Wang without even waiting for him to comply with the command. Police bodycam footage shows a possible negligent discharge. Wang was unarmed.

Officers did try to administer aid, but Wang later died in the hospital from his injuries.

Attorney Brian Dunn of the Cochran Firm, who represents the Wang family stated “My. Wang was passive. He had nothing in his hands.”

Chino police offered their condolences to the Wang family shortly after the incident, “Our department is also reviewing the shooting from all angles and if we find any tactics, policies, procedures or other issues or actions that need to be addressed, we will address them.”

His Name Was Shuo Zeng: An IBM Engineer Murdered For His Laptop

Chino police seized 16.5 pounds of marijuana, 1,500 marijuana plants, $35,000 in cash, and identity theft evidence, according to the Daily News.

As of September 5, 2019, legal actions have begun on behalf of the Wang family. No other information is being provided because the investigation is still ongoing as of 2020. Bodycam footage critiqued by some experts do suggest Wang did not pose an imminent threat to police officers and his shooting was unjustified.