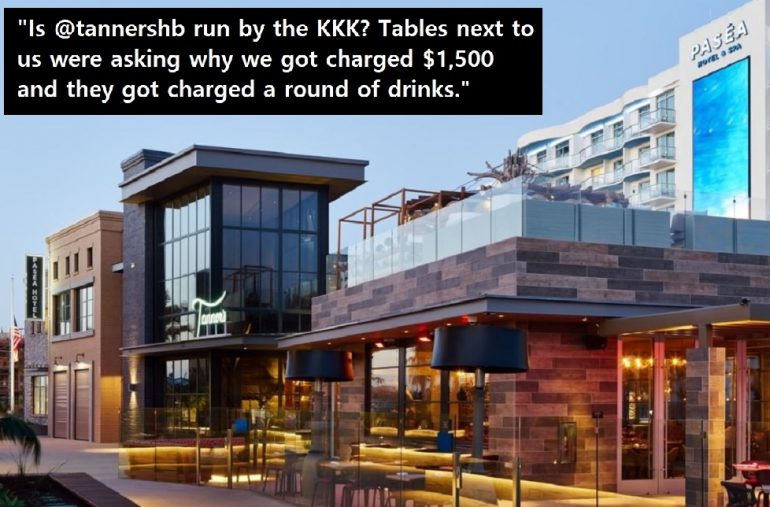 A Huntington Beach restaurant named Tanner’s is allegedly charging Asian patrons up to $1,500 for a table, while Caucasian patrons are sitting down for free and only paying for drinks they ordered accordingly.

A follower reached out to Asian Dawn and explained “If you read comments my friends (asian males) got charged $1,500 while the table next to them who were white got charged just a round of drinks.”

Basically, the Asian table didn’t mind paying for the $1,500 premium table. What they did mind was within a few minutes they changed tables because of sun exposure and the Caucasian party who then took their place was charged nothing; only the drinks they purchased. If the laws of supply-and-demand are true, how busy is this restaurant, that two separate groups entering the premium section within 5-10 minutes of each other, get charged such a disproportionate amount?

One supposed friend of a patron commented on their Instagram page: “Heard your [sic] about your racist policies. Up charging minorities patrons $1,500 just to sit down while the white patrons sit for nothing? For shame, cheers to your demise.”

Other Instagram users weighed in “I’m here charging 1k in Hollywood to get a table at my club. @tannershb get your sh*t together before you guys get a bad name specially YOU guys run of a minimum of 500$ to get a table. YOU AINT HOLLYWOOD AND WILL NEVER BE.”

If these allegations are true, one might want to stay clear of Tanner’s to avoid that $1,500 table if you’re not Caucasian.

However, Tanner’s statement was quickly rebuked by witnesses, also via Instagram