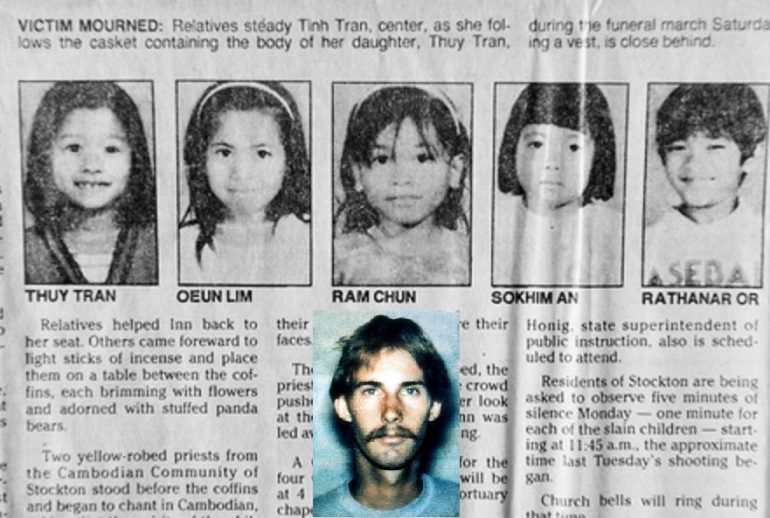 On January 17, 1989, a 24-year-old man named Patrick Purdy set his station wagon on fire with a Molotov Cocktail, walked onto the campus of Cleveland Elementary School in Stockton, California, the very same school he once attended when he was a child, and opened fire on a bunch of innocent children with his Chinese made AK-47.

He would end up firing more than a 100 rounds, killing five students and injuring 30 others. Of those who were injured, 29 were students and one was a teacher. Nearly half of those injured were critical. The Cleveland Elementary School Shooting held the record for most fatalities in a school shooting in the United States until nearly a decade later when Columbine happened.

The children he was specifically targeting were Southeast Asian. All five children who were murdered were Asian. Rathanar Or, 9, Ram Chun, 8, Sokim An, 6, Oeun Lim, 8, and Thuy Tran, 6.

Patrick Purdy believed Asians were taking away jobs from “native-born Americans,” and he needed to do something about it. Unfortunately, Purdy’s “Blame Asians” mentality was a common belief during the 1980s when Japanese companies were outperforming American companies left-and-right. Overnight, Japan’s Toyota, Honda, and Datsun (Nissan) toppled the Big 3 (GM, Ford, Chrysler) and caused thousands of Americans to lose their jobs.

As soon as police officers arrived on the scene, Purdy committed suicide with his pistol. He carved the words “victory,” “freedom,” “Hezbollah,” on his rifle and his flak jacket had “PLO,” “Libya,” and “Death to the Great Satin,” inscribed on it.

Patrick Purdy himself was a disturbed individual as anyone in his position would be, regardless of race. It takes a special individual to wake up one morning and decide to shoot and murder multiple individuals, or children for that matter, and not “special” in a good way.

How Japan’s Sony Music is Closing in On Global Dominance

Purdy’s criminal history was extensive. He was arrested when he was 15-years-old for a court violation, underage drinking, prostitution in 1980, possession of marijuana, drug dealing, possession of an illegal weapon in 1983, and armed robbery (he only spent 32 days in jail for that).

The ramifications for this shooting resulted in the Assault Weapons Control Act, which was the first legislative restriction on assault weapons in the nation, according to ABC10. This piece of legislation became the model of a federal statue in 1994.