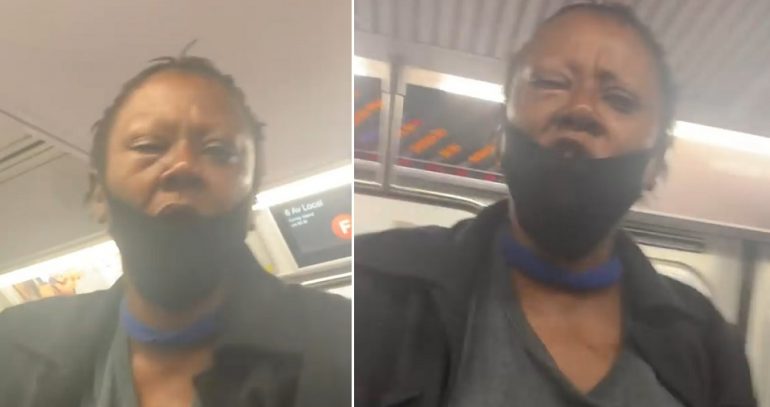 According to AsAmNews, New York F train passenger Jess Mo was sitting down, minding her own business with her Airpods on when she noticed another female passenger mumbling something at her. Mo couldn’t hear clearly what the woman was mumbling about until she took off her Airpods.

The female passenger, only identified as an African-American woman began screaming and cursing at Mo. “You fu*king Chinese don’t speak English, go back to China!” the passenger screamed with her face mask down.

Mo reached down, grabbed her phone, and began filming the incident while telling the passenger to keep back.

“She got even closer and smacked my phone, and continued screaming and harassing me. Thank god a good Samaritan elder man had helped me separate that woman for me.” Mo stated to AsAmNews.

Mo reported the incident to transit security who in-turn told her to notify the police. Mo was not injured during the incident.

These incidents are one of the hundreds of documented cases in New York, alone. The majority of anti-Asian hate crimes are being reported in progressive, blue-states. These statistics sound confusing to some because it destroys the false narrative that Midwestern states (Trump country) would experience the brunt of these types of incidents. Progressive states dominate racial attacks against Asians with Calfornia leading the way at 31.8%. Remember, Asians are only 14.9% of California’s population, but the state reports 31.8% of national attacks against Asians.

Anyone with information in regard to this incident is asked to call the NYPD’s Crime Stoppers Hotline at 1-800-577-TIPS (8477) or for Spanish, 1-888-57-PISTA (74782). The public can also submit their tips by logging onto the CrimeStoppers website at WWW.NYPDCRIMESTOPPERS.COM or on Twitter @NYPDTips. All calls are strictly confidential.