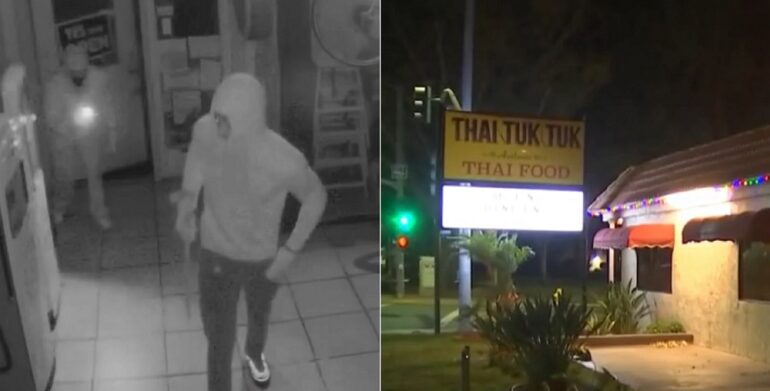 CORONA, CA—A Thai restaurant owner and his son confronted thieves who broke into their restaurant Thursday morning and were chased on the freeway.

Thai Tuk Tuk, owned and operated by a father and son, was burglarized for the third time. But this time, the restaurant owners decided to fight back.

Unfazed by the alarm, the two men continue to rob the restaurant for about 40 seconds before attempting to leave the scene.

However, the landlord of the building, who lives nearby, was alerted to the alarm and tried to intervene as the burglars were leaving the building.

The men pointed a gun at her head and tried to take her phone away and even tried dragging her into their car. Thankfully, she managed to escape, according to NBC4.

Within seconds, the restaurant owners arrived on the scene.

“When we got here, they were in the process of getting in their car and leaving already. Right then, we decided to follow them, slowly slowly slowly,” the restaurant owner’s son said.

Both father and son wish to remain anonymous due to safety concerns.

Authorities say the burglars then pointed a gun at the owners as well before they headed onto the 91 freeway East.

“I think the driver started to pick up that we were following them, and then that’s when it became a speed chase on the 91 a little bit,” the restaurant owner’s son said.

The son says he was on the phone with the police, giving them directions.

Thanks to his directions, responding officers ambushed the fleeing burglars, which forced them to bail out from their car on the freeway shoulder. All three suspects were subsequently arrested.

“We were a victim of theft before. So basically, we just don’t want to be victims again,” the restaurant owner’s son said. “It just felt like the right thing to do, you know? You gotta go after them sometimes.”

According to police, all three male suspects are from Los Angeles County and are now in custody with $1 million bail enhancements.