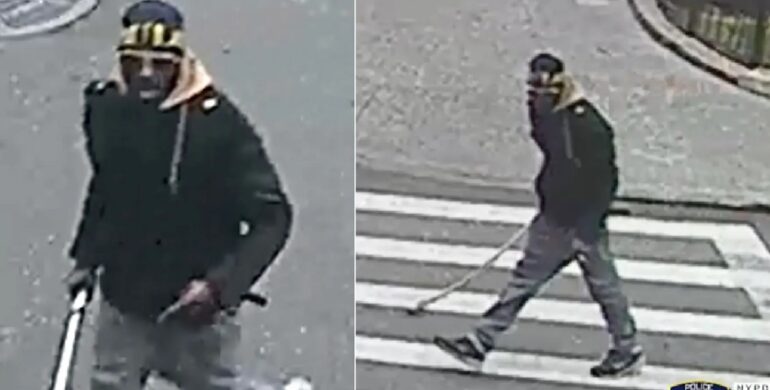 NEW YORK CITY—An African-American male who randomly attacked a 12-year-old Asian boy on his way to school—beating him with a single crutch—was arrested this week.

Jamal Mcllwain, 28, attacked the unsuspecting kid near the corner of St. Paul’s Place and St. Paul’s Court in Prospect Park South around 7:40 a.m. on November 17.

Mcllwain smashed the 12-year-old victim twice on the head with the crutch and tried for a third swing, according to the NYPD.

The 12-year-old victim sustained injuries to his head and was treated in urgent care and was listed in stable condition.

The 28-year-old African-American male suspect was arrested Wednesday when a 911 caller reported a “disorderly male” in front of an unspecified high school.

Upon his immediate arrest, responding officers recognized him as the suspect in the crutch attack. He was charged with assault, acting in a manner injurious to a child, and menacing.

Police say Mcllwain picked the crutch up off the ground, possibly from a pile of trash and was hanging out before attacking the Asian boy.

Teen Dies a Week After Being Shot in the Head

Mcllwain calmly walked away after the assault, threw the crutch on the sidewalk, and headed north on St. Paul’s Place as if nothing happened.

“It’s weird how he ran across the street just to hit me,” the 12-year-old told WPIX Wednesday. “When he hit me, it took me a few seconds to process what was going on. I tried to block it with this arm and ran.”

“I’m feeling better than a few days ago when I got hit. The eye used to be swollen very much. I didn’t do anything to him, so how come he has a grudge against me?”