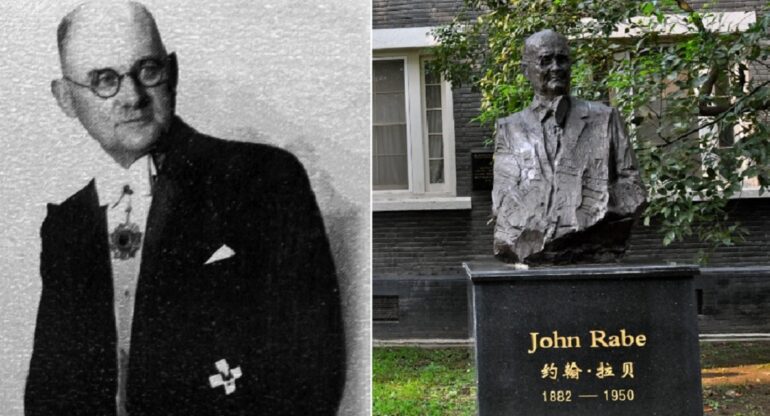 This is the story of a Siemens AG employee and devout Nazi Party leader who became known in China as “the living Buddha of Nanjing.”

John Rabe was employed by Siemens and arrived in China in 1910. He was later transferred to the Nanjing office in 1931, selling telephones and electrical equipment to the Chinese government. He was also a lead figure of the German community in the city and later became head of the International Safety Zone, which he would later use to save hundreds of thousands of Chinese lives.

Make no mistake, John Rabe was a devout Nazi and believed in Aryan superiority, like many industrialists at the time, including Henry Ford, founder of Ford Motors.

During a Nazi Party meeting in Nanjing in 1938, Rabe told his German audience “I believe not only in the correctness of our political system but, as an organizer of the party, I am behind the system [Nazism] 100 percent.”

John Rabe supported Adolf Hitler and believed his fuehrer’s views on the Chinese and Japanese as scripture.

“Pride in one’s own race-and that does not imply contempt for other races-is also a normal and healthy sentiment. I have never regarded the Chinese or the Japanese as being inferior to ourselves. They belong to ancient civilizations, and I admit freely that their past history is superior to our own. They have the right to be proud of their past, just as we have the right to be proud of the civilization to which we belong. Indeed, I believe the more steadfast the Chinese and the Japanese remain in their pride of race, the easier I shall find it to get on with them,” Hitler wrote.

Under the advice of the Japanese Empire in mid-1937, German nationals began leaving Nanjing before Japanese Imperial troops reached the gates of the city later that year. However, Rabe chose to stay and became head of the International Safety Zone in the city.

Japanese embassy officials met with Rabe and strongly suggested he leave the city; Rabe refused. Imperial Command dispatched Japanese Major Oka to protect Rabe and other German/and or Italian citizens during the fall of Nanjing.

During their first meeting, Maj. Oka asked Rabe “Why in the devil did you stay? Why do you want to involve yourself in our military affairs? What does all this matter to you? You haven’t lost anything here!”

Rabe replied “I have been living here in China for over 30 years. My kids and grandchildren were born here, and I am happy and successful here. I have always been treated well by the Chinese people, even during the war. If I had spent 30 years in Japan and were treated just as well by the Japanese people, you can be assured that, in a time of emergency, such as the situation China faces now, I would not leave the side of the people in Japan.”

From witness accounts, Rabe’s reply dumbfounded Maj. Oka, who took a step back, mumbled words about “Samurai obligations,” and “deeply” bowed to Rabe as a show of respect for his loyalty.

During the invasion of Nanjing, it is estimated that the Japanese raped over 20,000 women and killed between 200,000 and 300,000 civilians. For comparison, Soviet soldiers raped at least 100,000 German women during the fall of Berlin in 1945, according to Alarabiya News.

Things were getting so bad, Rabe wired Adolf Hitler on November 25, 1937, and requested “kindly intercession in asking that the Japanese government grant the building of a neutral zone for those who are not fighting to battle for Nan[j]ing.”

Rabe soon found himself dealing with over 250,000 refugees clustered in a two and a half-square mile area surrounded by Nazi flags, so Japanese planes wouldn’t bomb the zone.

During his patrols around the safety zone, Rabe would often be approached by Chinese men, begging him to help stop a rape in progress. Rabe would drive to the scene and berate and scream at Japanese soldiers while showing his swastika armband and physically stopped soldiers during sexual assaults.

Imperial High Command later wired Adolf Hitler directly and complained about John Rabe’s actions in the city. On February 28, 1938, he was ordered to return to Germany for his “un-Aryan actions against the Japanese.”

Rabe finally returned to Germany on April 15, 1938, and brought with him films and photographs of Japanese atrocities in the city and prepared hundreds of pages of reports for Adolf Hitler.

Upon arriving, he was immediately detained and interrogated by the Gestapo.

However, due to Siemens AG, Rabe was released and ordered never to lecture or write about the Nanjing massacre. He was allowed to keep documents but his films and photographs were confiscated. Because of his loyalty to the Nazi Party, Rabe was allowed to work at Siemens AG Berlin headquarters until the end of the war.

After the war, Rabe was arrested by the Soviet NKVD, then by the British Army. After intense interrogation, he was released. He was later denounced for his Nazi Party membership and lost his work permit in the British Occupation Zone.

Rabe was unable to work and used up his life savings and his family survived in a one-room apartment by selling his Chinese art collection. Although he was considered formally “de-Nazified” by the British on June 3, 1946, Rabe and his family continued to live in poverty.

In 1948, Nanjing citizens learned of Rabe’s dire circumstances and were able to raise $2,000 USD ($23,000 in 2022). Nanjing’s mayor traveled to Germany and supplied a large amount of food for the Rabe family.

The citizens of Nanjing were able to supply food packages and money on a monthly basis until the communist revolution. Rabe often wrote many letters expressing deep gratitude to the Chinese people.

John Rabe died of a stroke on January 5, 1950, he was 67 years old. In 1997, his tombstone was moved from Berlin to Nanjing, where it was placed at the massacre memorial site. In 2005, the Chinese government restored Rabe’s former residence in Nanjing; now called the John Rabe House.

Rabe’s grave in Kaiser Wilhelm Memorial Cemetery in Berlin was re-erected in 2013. His wartime diaries about the atrocities of Nanking were published in English as The Good German of Nanking.