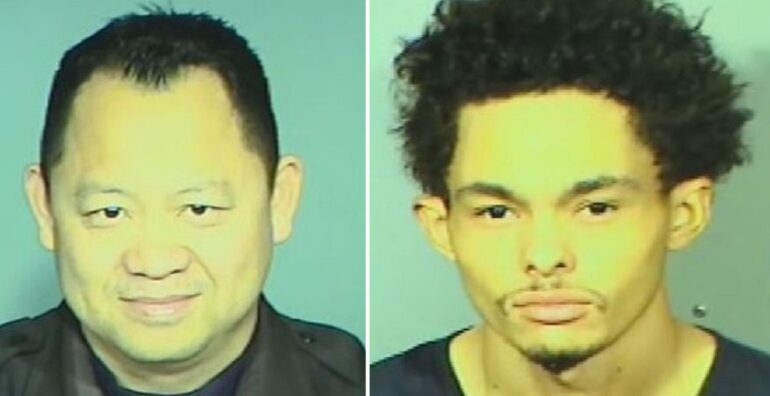 LAS VEGAS, NV—A veteran police officer was shot and killed in the line of duty near the Las Vegas Strip early Thursday morning.

The shooting took place near the 800 block of E. Flamingo Road around 1 a.m., 911 operators received a call about a domestic disturbance, according to FOX5 KVVU.

The suspect, identified as 24-year-old Tyson Hampton, was armed with a pistol and fired at responding officers, causing both officers to fire their weapons.

Officer Truong Thai, 49, suffered a gunshot wound to his torso and died at Sunrise Hospital. A bystander was also shot during the attack and was transported to the hospital.

The 24-year-old suspect fled and scene.

Hampton was later found and refused to comply with officers’ demands when he exited the vehicle, which caused police to deploy a K-9 on him. He was taken into custody.

In a social media post, South Central Area Command stated Officer Thai was a “dedicated, 23-year veteran” of the department. He held various roles with the department, including a firearms instructor. “He was passionate about training new officers.”

Clark County Sheriff Joe Lombardo said Hampton does have a criminal history but declined to go into detail. Further information will be provided during the department’s traditional 72-hour briefing on the shooting.