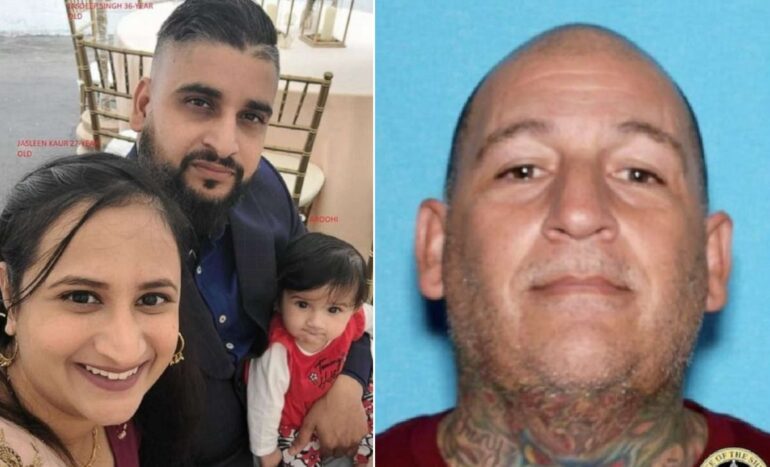 MERCED COUNTY, CA—All four family members who were mysteriously kidnapped have been found dead in a rural farm area, according to the Merced County sheriff.

Jasleen Kaur, 27, her 36-year-old husband Jasdeep Singh, and their 8-month-old daughter, Aroohi Dheri, were taken against their will from their trucking business in Merced County in Northern California on Monday. The baby’s uncle, 39-year-old Amandeep Singh, was also kidnapped.

A farm worker in the area stumbled across the bodies of the family, which were found relatively close together, according to Merced County Sheriff Vern Warnke.

Authorities are still processing the scene and not all facts are known yet.

A person of interest was taken into custody Tuesday and police released surveillance video of the kidnapping.

According to authorities, someone was seen walking along the highway near the business that morning. Jasdeep Singh made contact with the suspect and the two walked back toward the building.

The suspect can be seen pulling out a gun and entering the business on video.

At 9:11 a.m., surveillance footage showed the back door opening and the armed suspect exiting. Jasdeep and Amandeep Singh were seen exiting the building with their hands zip-tied behind their backs, and were put in the back seat of the pickup truck.

The truck left for a few minutes and then returned. Video captured the suspect getting out of the truck and walking into the business once more.

Less than one minute later, Jasleen Kaur and her 8-month-old baby exited the business. The final footage showed the truck leaving the business. No one else was inside the building at the time, other than the family members.

Salgado attempted to take his own life “prior to law enforcement involvement” and is currently in critical condition.

There is no motive behind the killings yet.

“We don’t know if there’s prior history” with the person of interest and the family, the sheriff told ABC News on Tuesday.

“That person right now is our sole lead,” the sheriff said Wednesday.

Amandeep Singh’s truck had been found on fire shortly before noon on Monday. Authorities then went to Amandeep Singh’s Merced home around 12:35 p.m. Monday and were unable to locate him.

Police spoke with another relative who soon reported them missing after failing to reach them. Police later determined the family members were kidnapped. Authorities also discovered two recent bank transactions from the family accounts.

Detectives later received information that one of the victim’s ATM cards was used at a bank in Atwater. The person captured in surveillance footage making the transaction at the bank matched the appearance of the suspect kidnapping the family members.