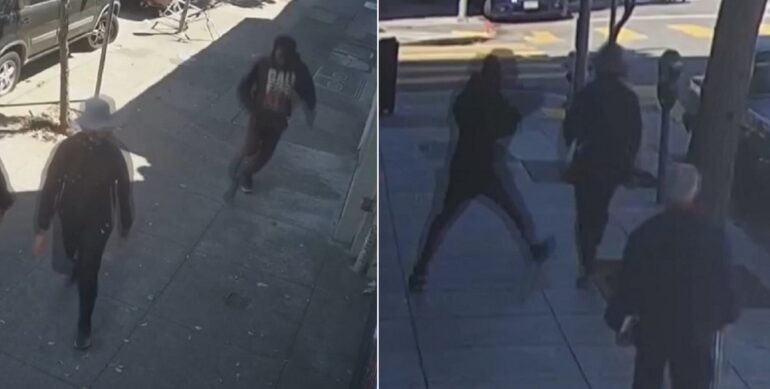 SAN FRANCISCO, CA—Police are searching for an African-American man who specifically attacked two Asian women minutes apart in the city’s Richmond District, which is considered the “safer side” of the city.

One of the attacks happened just after 11:30 a.m. Wednesday, August 10. Surveillance footage shows a man in a black hoodie speaking to himself as he makes his way east on Geary Street. The man points at an elderly Asian woman, causing her to glance at him, which sets off the attack.

The African-American male suspect immediately attacks the Asian woman, running her down and repeatedly punching her in the face. A car alarm is set off as the Asian woman falls against it, which causes her attacker to run away.

Some say the glance was the Asian woman being anti-Black and she deserved it.

A witness ran out to help and told NBC Bay Area the 65-year-old Asian woman was left with a bloody lip, bloody teeth, and damaged glasses.

The witness—who didn’t want to be identified—said the entire situation seemed much more horrific because that was the suspect’s second attack on an Asian woman.

The first attack occurred moments earlier and was also caught on surveillance video. The same man is seen punching another Asian woman as she crosses the street.

“If you carry pepper spray – what are we going to do if they’re going to attack you? They’re faster than us and we are only women,” a nearby business owner told NBC Bay Area. “What should we do?”

Authorities have a vague description of the suspect and no arrests have been made.