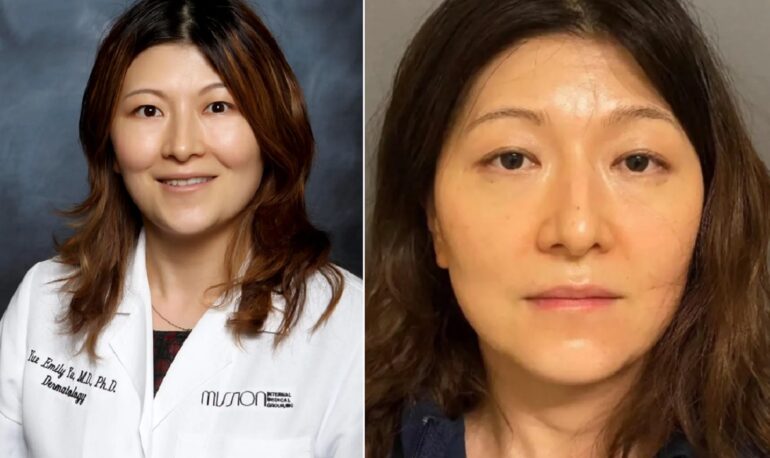 IRVINE, CA—An Orange County dermatologist was arrested last week for allegedly poisoning her husband—who set up a hidden camera to catch her in the act, police said.

Yue Yu, 45, was busted Thursday after authorities served a search warrant on the couple’s $2.5 million mansion in Irvine.

Jack Chen, Yu’s 53-year-old husband, told police he had been suffering from an unexplained ailment for about a month. He later turned over video evidence proving his suspicions

“His condition became increasingly worse and based on the husband examining his routine and looking at what could be causing it, he grew suspicious of his wife and put a hidden camera in place that captured her poisoning him,” Irvine police Lt. Bill Bingham told the New York Post Monday.

The couple had been married for 10 years.

“We do believe this is a domestic-related incident,” he said. “There’s nothing that we discovered that could cause concern for patients that [Yu] treated.”

Yu is currently listed in good standing with the American Board of Dermatology. She attended medical school at Washington University in St. Louis and became a board-certified dermatologist in California in 2010.

Asian Man Shot and Killed in Philly For Driving Too Slow

Yu treated patients from her Mission Viejo office at Providence Mission Hospital before being arrested. She later posted $30,000 for bail and was released Friday evening.

Chen filed for an emergency restraining order in Orange County on Friday—claiming he was the victim of domestic violence. He then filed for divorce the very same day. The couple had been married since July 2013 and have two children, ages 7 and 8, reports The Post.

The 53-year-old husband is also seeking custody of their children and asked the court to keep the children away from their mother pending an upcoming court proceeding scheduled for August 18.