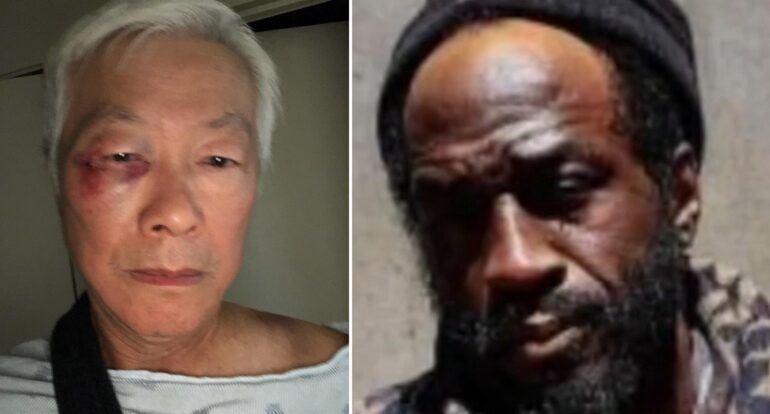 When ABC7’s Dion Lim visited Greg Chew on Friday, he was in bad shape. His eye was purple and he wore a sling after losing the ability to move his left arm after he was attacked across the street from his 3rd and Folsom home.

“I got punched in the face, kicked, beaten,” Chew explained.

Sunday afternoon, the SFPD informed Dion Lim they arrested 34-year-old Derrick Yearby and she was also able to obtain pictures of him—proving he was African-American. Many online trolls tried passing him up as Caucasian.

When Dion Lim checked on Chew Monday, he was relieved.

“I was not expecting that. It was such a swift arrest, I was quite delighted it happened,” he told her via Zoom.

Black-on-Asian violence has become a “taboo” issue in mainstream media. Many falsely state that 75 percent of all violent crimes against Asians are perpetrated by Caucasians—even though thousands of video evidence prove otherwise.

The slogan: “’They’ want us to fight each other, our communities need to work together,” is a common theme amongst the liberal African-American and Asian-American communities. Implying the “invisible” strings of “white supremacy” are forcing African-Americans to attack Asians.

“I want the AAPI community to know regardless if we can charge a hate crime, this is still a very violent, serious attack that will be treated as such,” stated San Francisco District Attorney Brooke Jenkins.

However, SFPD Chief Bill Scott—who is African-American—complained releasing mugshots to the public makes his “people” look bad, which is why mugshots are no longer released. The safety of San Francisco citizens is a small price to pay to help African-Americans not look like criminals.

DA Jenkins stated she is taking the public’s concern over cases like Greg Chew’s seriously and she’s working on forming a vulnerable victims unit that specializes in cases involving hate crimes and the elderly.