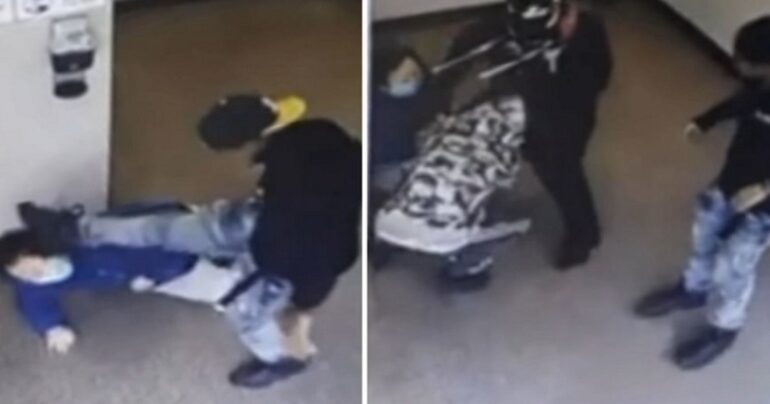 SAN FRANCISCO, CA—Authorities are searching for an 11-year-old boy and three other younger suspects in a brutal attack on a 70-year-old Asian woman in San Francisco last, according to FOX News sources.

Another 14-year-old African-American girl is seen kicking the 70-year-old victim in the head in the Anza Vista neighborhood.

Another African-American male who just turned 18 is also being sought by authorities.

Two other suspects were allegedly associated with a group involved in a string of robberies and were arrested in Oakland, reports FOX News.

Because nearly all the perpetrators are minors, their identities will remain sealed, which makes this case perfect for those who wish to blame the attack on “white supremacy.”

1 suspect asks her for the time. She shows her ⌚️ b/c she doesn’t speak Engl. She realizes the group is “up to no good” so she runs into the elevator.

The susps follow her & search her. They find an iPhone7. When Mrs. Ren refuses to give it up, she’s assaulted. #StopAsianHate pic.twitter.com/6n42qnhPKk

“They used their fist to hit my head multiple times and then they pulled me down and kept kicking me,” Mrs. Ren told ABC7’s Dion Lim last week through an interpreter.

“They search my body and I quickly realize they’re up to no good.” Mrs. Ren stated.

The suspects soon realized she had an iPhone7.

Housing complex surveillance footage provided to the SFPD showed the suspects following Mrs. Ren into the elevator when she refused to hand over her phone.

“They got really mad and pulled me down.”

The group of teens pounced on Mrs. Ren like a pack of wild chimpanzees and threw her to the ground and repeatedly kicked her in the face and stomped on her.

“They used their fist to hit my head multiple times and then they pulled me down and kept kicking me.”

But the horror doesn’t end there. When Mrs. Ren tried to hide in the hallway and was unable to close the door—the suspects returned. They didn’t want her watch or earrings, they wanted her keys and to also take turns beating her.