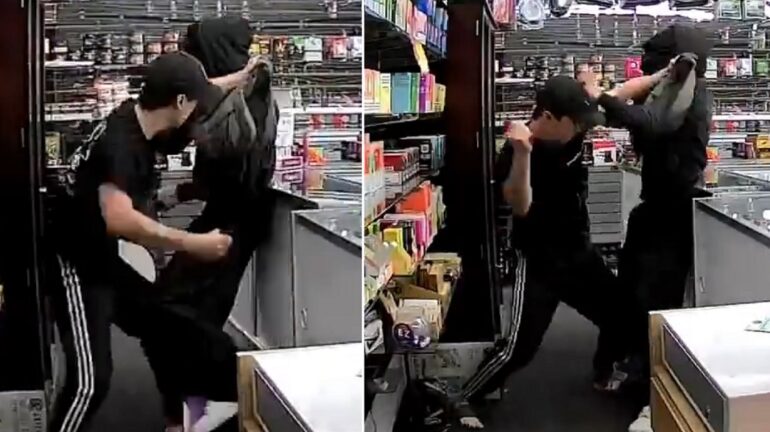 LAS VEGAS, NV—Two male suspects walked into the Smokestorm Smoke Shop near the 4500 block of West Sahara Avenue on Tuesday around 3:30 p.m. and attempted to rob the establishment.

While the two men attempted to rob the show, storeowner Johnny Nguyen, 22, grabbed one of the suspects after he jumped behind the counter and started stabbing him several times throughout his upper body with a three-inch blade after fearing for his life.

The other suspect leaves his accomplice behind as Nguyen repeatedly stabs him.

The suspect can be heard screaming “I’m dead, I’m dead…..” while getting stabbed and dragged out of the counter by the store clerk.

“I remember him saying, ‘Please don’t let me die,’” Nguyen told the New York Post. “He said he was sorry. By that point, he took off his mask himself. I was trying to get on the phone with the police when he was trying to talk to me. I just ran and wanted to make sure the police and ambulance would get here on time.”

Police have arrested the juveniles who are seen apparently trying to rob the store and the person who was stabbed was taken to the hospital, according to FOX21 News.