Convicted Pedophile Was Sodomized, Tortured and Stabbed Up Nose in Prison

Huckle was serving 22 life sentences with a minimum prison term of 25 years before being eligible to apply for parole for raping around 200 Malaysian and Cambodian children a decade ago, according to Metro.

Richard Huckle was a freelance photographer from Ashford in Kent and abused scores of children while volunteering in orphanages in Malaysia. He also portrayed himself as a Christian teacher spreading Jesus’ love overseas.

Huckle often filmed himself and photographed raping children and shared them online with other pedophiles worldwide. He semi-wrote the handbook on targeting children from poor communities or orphanages and explained it was a lot easier than targeting “well-to-do Westerners.”

Metro, a British tabloid reported prosecutor Alistair Neil Macdonald explained to Hull Crown Court that objects were inserted into Huckle’s anus and brain as “a form of punishment” for the crimes he committed.

Huckle was assaulted by a fellow inmate, 29-year-old Paul Fitzgerald, who was sentenced to indefinite imprisonment for sexually assaulted a dog-walker in 2009. Fitzgerald allegedly attacked Huckle in his cell.

According to reports, Fitzgerald strangled Huckle with a ligature, shoved a pen up his nose into his brain, and inserted a kitchen utensil up his anus.

Fitzgerald is currently on trial for murdering Huckle. The court heard the attack in prison was carefully planned by Fitzgerald himself, who then later stated Huckle’s death was “poetic justice.”

However, Fitzgerald’s defense is arguing for manslaughter by diminished responsibility. His lawyers are saying Fitzgerald is suffering from a mixed personality disorder, psychopathy, and gender identity disorder. 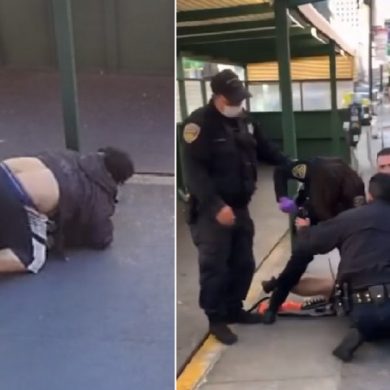