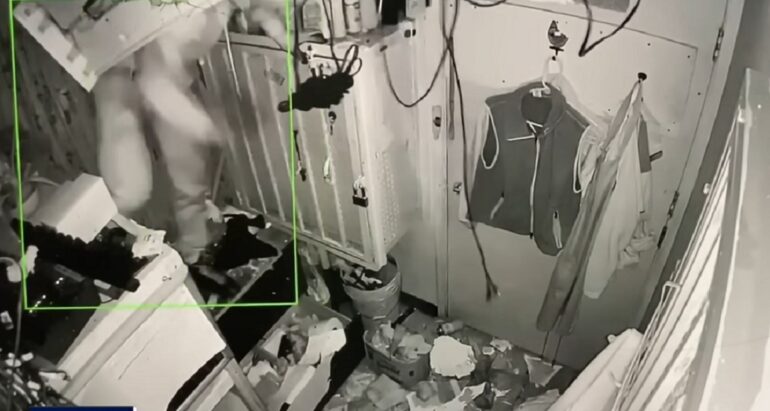 OAKLAND, CA—Businesses owners at a strip mall in Oakland’s Little Saigon were livid Monday after burglars hit the entire complex before dawn, breaking in through roofs and popping front-door locks.

“All seven stores here got burglarized in a span of like less than two hours,” stated Simon Liu, owner of V&J Fusion, a Vietnamese restaurant.

The first break-in was reported around 4:30 a.m. Monday. Several stores were broken into through the roof. Surveillance footage showed one intruder entering Coin Laundromat from the ceiling.

The burglar didn’t seem to care he set off an alarm.

A witness to the burglary told KTVU she called police around 4:30 a.m. But Oakland Police Chief LeRonne Armstrong stated dispatchers weren’t notified until 6:20 a.m. By the time responding officers arrived, the burglars were gone.

“The robbers came down through the roof. There’s a hole in my hallway right now,” Liu said of his restaurant.

The burglars didn’t steal much but “the damage is more than the money that they took,” Liu told KTVU.

“It’s just unexpected. Shock, because whoever expects this to happen, you know?”

The intruders also popped the locks of four other businesses.

“They break the vending machine and take the bills and coins in there,” said the owner of a water business.

Business owners wondered why it took Oakland police so long to respond. However, officers and a technician spent hours gathering statements and surveillance video.

“I’m very angry,” said Nolan Wong, who owns the laundromat where the burglars came down through the roof.

“This is continuing every single week, you know? We never get a break. It’s just constant,” Wong continued.

Wong’s laundromat was the same business where an Asian couple was robbed, the entire incident was also caught on video.

They ransacked an entire strip mall in Little Saigon before dawn, breaking in via roofs & popped locks. But one guy actually went back & apparently gave the local homeless guy some spare change. Merchants speak out. @oaklandpoliceca investigating. 4,5, 6:30, 7 p.m. @KTVU pic.twitter.com/uxJpG7lzQQ

Surveillance footage showed the burglars were in no hurry during their spree. One burglar goes back and gives a homeless man some spare change at one point.