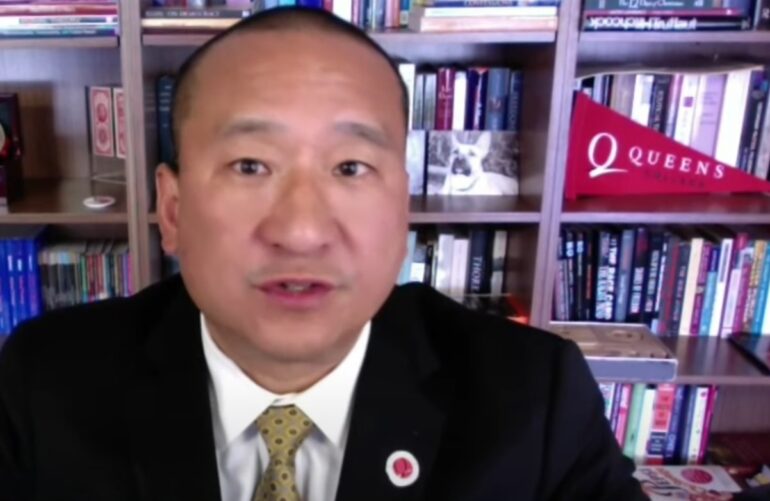 QUEENS, NYC—A Queens College’s acting head of security allegedly made multiple racist remarks about the college president—who is Asian—and insulted other ethnic groups, according to an online petition.

Deborah Huggins—who is Black—is a campus police lieutenant and recently appointed interim public safety director. She allegedly made the comment about Frank Wu, who was named head of the college back in April 2020, the first Asian-American to hold the post.

Huggins referred to Wu’s 12th-floor office as “Corona on 12” and stated: “I’ve gotta get my nails done by the ch**ks,” according to a staffer who heard the remark.

Huggins also told Muslim employees not to wear their head coverings and said certain ethnic groups were not allowed to use the microwaves because the smell of their cuisine was “offensive” to her, the staffer said.

According to the online petition, a former Queens College security guard—who is Latino—stated Huggins made insulting remarks to him after he was called into the office by someone else, saying, “I hate house rats.”

Huggins would also ask the Latino security guard and other guards to leave their posts and come to the office to help her with her college coursework.

Current and former staff members reported Huggins’ conduct to college officials, however, no action was ever taken. The college is part of the public City University of New York system.

The online petition calls for the college to bring back its former security director, Anastasia Koutsidis, and explained she was “unfairly” cast as a racist for her handling of an earlier incident, which involved a swastika and “KKK Lives!” scratched into a bulletin board back in January.

The New York Post reached out to Huggins about these allegations. “I don’t have no comments,” she responded.

A college spokesperson told The Post Huggins “brings 26 years of extensive experience at the college to her position,” but declined to comment on the online petition.