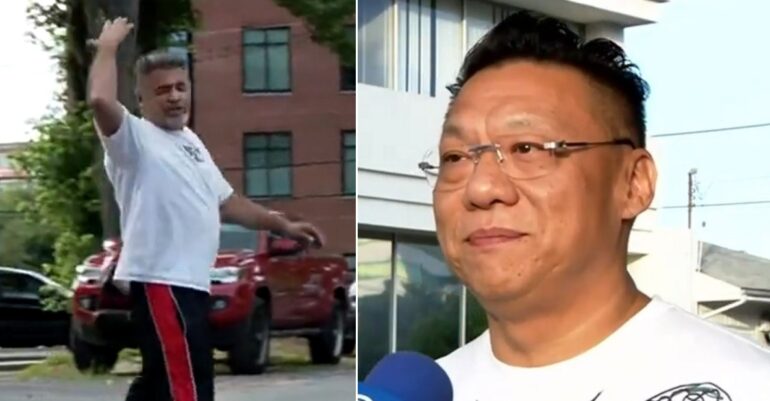 ROCKVILLE, MD—An Asian man drove to a Rockville McDonald’s last Saturday to order his usual Diet Coke before running a few errands. However, he left the establishment with spit residue on his face and bruises on his legs. When a reporter attempted to interview the assailant, he ended up getting verbally harassed.

Shang Wang arrived at the McDonald’s located along the 1300 block of Rockville Pike, shortly before 12 p.m. Wang said he passed a red Nissan SUV that was idling and ended up blocking the main drive-thru lane, reports 7News.

“It seemed like he was on the phone. So, I just drove around him and went and ordered my drink,” Wang told 7News. “I didn’t think anything of it and then I heard honking, just constant honking behind me.”

Confused by the loud noise behind, Wang exited his vehicle and confronted the alleged attacker, later identified by Montgomery County Police as 54-year-old Brandon Storm of Rockville. Judging by Storm’s accent, his last name sounds made-up.

“As soon as I get out, he actually starts kicking me and he starts spitting at me some more. And instead of fighting back, I just took it. I felt like if I had retaliated, I would have been charged,” Wang told 7News.

Wang, who immigrated from Taiwan in 1977 and grew up in Fairfax County—called 911 with his smartphone as Storm hurled more anti-Asian insults and kicked him around the ankles and legs. By the time police officers arrived, Storm fled the scene.

“I felt very violated. What are you supposed to do when someone starts spitting at you with these racial taunts? He even said he was going to come to my house and rape my wife and kids. I wasn’t too worried though because I’m not married and I don’t have any kids.”

7News located Storm Tuesday evening at his workplace, Auto Wholesalers. The 54-year-old quickly burst into a fit of rage and barraged the reporter with insults.

This is an extended portion of our interview with Brandon Storm.

Storm, 54, is accused of kicking and spitting at an Asian man at a Rockville, Md. McDonald’s drive-thru.

Kevin Lewis proceeded to ask Storm if he spat at and directed racial slurs toward Wang at McDonald’s only a few days earlier.

“Come to the court. I’ll see you guys in court,” Storm responded with a chuckle.

“I’ve worked at this McDonald’s for almost five years now. I usually just do the weekends, but I’ve never seen something like this wild,” Chishty told 7News by telephone.

“He always just comes around to get a large Diet Coke with extra ice and goes about his business. He’s always been nice to me. I think he just wanted to get his soda and leave,” she added.