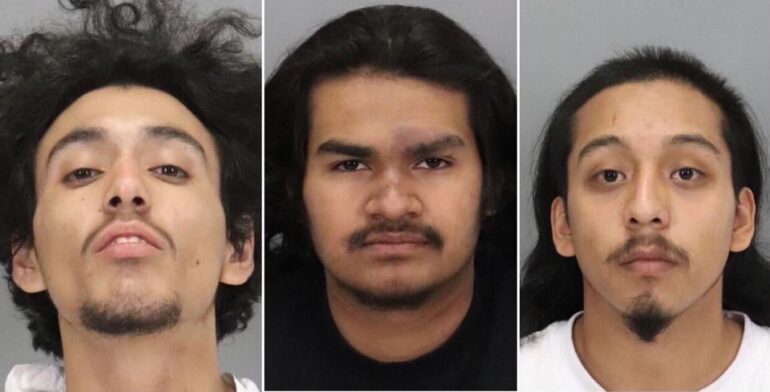 Armando Manzano and Daniel Mendez, both 19, Eduardo Santiago, 23, and a 17-year-old have been taken into custody.

A couple was home invaded and their car was used in another home invasion just a mile away after being terrorized for hours in late May.

The 82-year-old man who lives in the Berryessa neighborhood with his 72-year-old wife was home invaded by several individuals who jumped over a side fence and entered their home on the afternoon of May 31. Police say Armando and Daniel were involved in the home invasion.

The couple’s daughter, who requested not to be identified by name, translated and explained her stepmom “was watching her Chinese soap opera” at the time and “didn’t even finish the episode,” when the home invaders came in. The individuals used packing tape to cover their mouths and used their own belts to bound their wrists. The intruders then shoved the couple into a guest bathroom as they ransacked their home, reports ABC7’s Dion Lim.

𝗔𝗥𝗥𝗘𝗦𝗧𝗘𝗗 𝗳𝗼𝗿 𝗦𝗮𝗻 𝗝𝗼𝘀𝗲 𝗛𝗼𝗺𝗲 𝗜𝗻𝘃𝗮𝘀𝗶𝗼𝗻𝘀: police say 4 people were involved in the case I covered where seniors were tied up & pistol-whipped, their car stolen to commit another home invasion, kidnapping a father of a 15-month old.
⠀
(Thread ⬇️) pic.twitter.com/r9AOi7yMGS

“She’s like we don’t have a PIN number or password. And then the person on the other line said in Chinese ‘Are you telling the truth?’” said the daughter.

The San Jose Police Department was completely dumbfounded the criminals used a translator during the crime.

According to ABC7, the couple’s ordeal lasted two hours before the home invaders stole their car and used it to commit another home invasion just one mile away.

Dashcam footage in that second home invasion showed a woman returning home in the afternoon and panicking.

“My husband is at gunpoint! I have an infant!” She cries out.

As seen in other Ring surveillance used in the police investigation robbers also jumped a fence to enter this home. In addition to the gun, other tools were used to threaten the father and his 15-month-old boy, reports ABC7.

The home invaders in that second case even physically brought the victim to the bank in hopes of withdrawing cash. The suspects also wanted the victim to enter the bank and withdraw more cash, but the bank was closed.