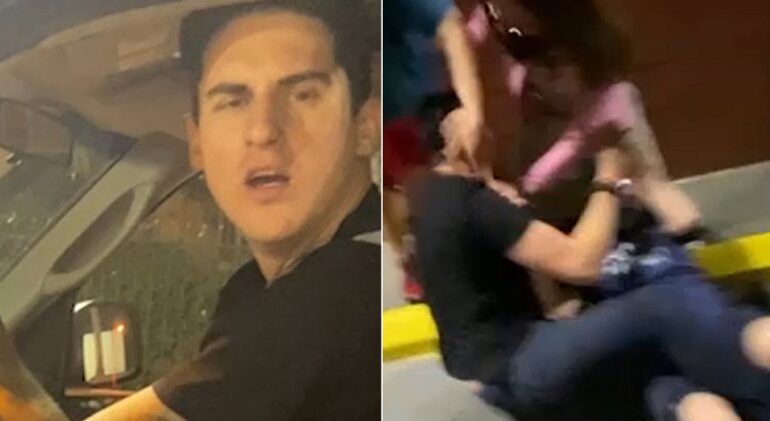 NORTH HOLLYWOOD, CA—A man who was caught on video attacking a Filipino-American family at a McDonald’s drive-thru in North Hollywood in May has been charged with a hate crime, authorities said.

Nicholas Weber, 31, of Sylmar, faces one felony count of battery with serious bodily injury and one misdemeanor count of battery, along with a hate crime allegation, according to the Los Angeles County District Attorney’s Office.

Patricia Roque and her mother, Nerissa, were in the drive-thru of a McDonald’s on Victory Boulevard on May 13 when a Jeep rear-ended them. The two women called 911 and Roque’s father for help, according to CBS News.

“I didn’t even know him and we [were not] not doing anything,” said Nerissa.

Weber drove by them twice and mocked them using a fake Asian accent and saying, “You’re so Asian” and “I kill you” from inside his vehicle.

“Definitely threatening to kill us,” said Patricia. “Honestly, I thought it was going to end with that.”

“It traumatized us,” said Nerissa.

When Gabriel tried to stop Weber from opening the door of the women’s car, he was punched and fell to the ground. Footage of the altercation shows the family and bystanders trying to restrain the man.

Nerissa was punched in the chest and Gabriel suffered a broken rib in the fracas, according to CBS News.

Nicholas Weber was arrested by the LAPD on suspicion of battery and assault with serious bodily injury. He was originally scheduled to be arraigned on June 8 but failed to appear.

Weber was taken into custody in Orange County for an unrelated matter.

The case remains under investigation by the Los Angeles Police Department.

“The unprovoked assault on members of our community is wrong and will not be tolerated,” District Attorney George Gascón said in the news release. “Our message against violence and racial hatred must be loud and clear. We will hold accountable the people who commit hate crimes in Los Angeles County.”