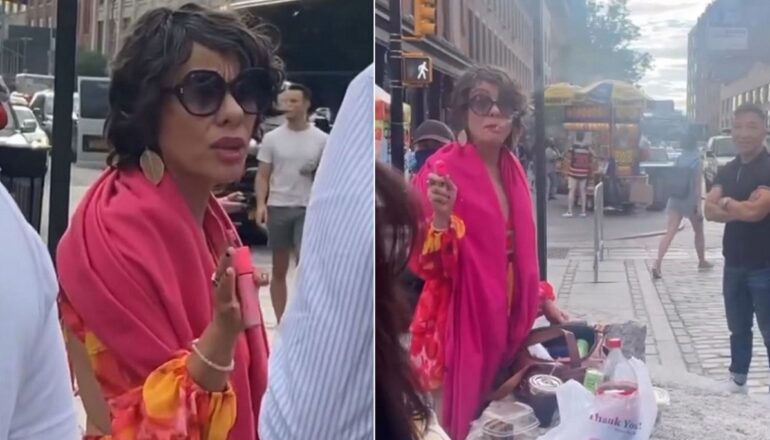 Barker was sitting in a public plaza in the Meatpacking District on Saturday and hurled hateful language at the young Asian women and then blasted them with pepper spray for no apparent reason.

Three of the four victims who spoke exclusively with ABC7 say they were enjoying a warm Saturday afternoon catching up with friends and checking out the flower installations in the Meatpacking District. That’s when Barker—who had her back to them—started an argument.

“She turned around and she was like, ‘you guys are trying to harass me,'” one victim said.

“I said, we’re not trying to bother you,” another victim said.

One of the victims said she even apologized to the suspect.

“Like I’m sorry, I didn’t intend to make you feel that way,” the victim said.

The group began recording Barker when she started her racist rant and pulled out a can of pepper spray.

“Saying like, go back to where you came from, you don’t belong here,” one victim said. “She pointed to an Asian bystander who was a man, we didn’t know who he was, pointed at him and said take your (expletive) back to your country.”

“We distanced ourselves, we tried to do the right thing,” another victim said.

Barker then walked up to the group and started spraying multiple women.

“It was so painful. I couldn’t open my eyes for about 30 minutes,” one victim said.

The women told ABC7 they received a message from someone who said she got the same treatment from Barker at the same location less than an hour earlier. Barker allegedly pepper-sprayed and verbally abused three people, including a 13-year-old girl.

“It’s not like we haven’t had racist remarks towards us growing up, but this was like the first time we’ve ever felt it to this physical extent,” one victim said

Meaning growing up, before Trump was president, these women experienced racist remarks as lifelong-New Yorkers, indicating a progressive city like New York was racist toward Asians far before President Trump started his rhetoric.