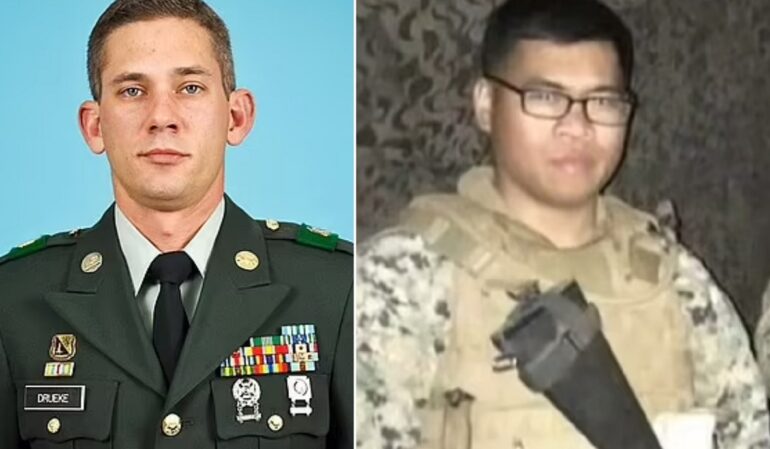 KHARKIV, Ukraine—Two American fighters have been taken prisoner in Ukraine, the first since the conflict began.

Robert Drueke, 39, and Andy Huynh, 27, are both from Alabama. They were taken prisoner by Russian forces last week on the outskirts of Kharkiv, according to the Daily Mail.

Drueke actually served in the US Army in Iraq. Huynh is a former Marine but has never been in active combat before.

The pair were part of a ten-man squad defending Kharkiv last week when they were ambushed by Russian soldiers after disabling a Russian tank with a grenade.

“We were out on a mission and the whole thing went absolutely crazy, with bad intel. We were told the town was clear when it turned out the Russians were already assaulting it. They came down the road with two T72 tanks and multiple BMP3s (armored fighting vehicles) and about 100 infantry. The only thing that was there was our ten-man squad,” an unnamed fighter told the Telegraph.

U.S. Intelligence believes both men were knocked unconscious by either an anti-tank mine, or by a tank shooting at them. Russian forces claimed that night to have captured the two Americans via Telegram app.

Drueke’s mother told Telegraph she is in contact with the U.S. government and hopes they will be able to secure her son’s release.

“The US embassy has assured me that they are doing everything they can to find him and that they are searching for him alive, not dead.

“I am doing my best not to fall apart, I am going to stay strong. I am very hopeful that they will keep him to exchange for Russian PoWs,” she said.

Drueke served in Iraq and struggled to find work after reintegrating back into society once the war was over. Huynh served in the Marines for four years, including a two-year stint in Okinawa.

Two British soldiers were recently captured by Russian forces. Shaun Pinner and Aiden Aslin have been handed death sentences by a proxy court in eastern Ukraine.