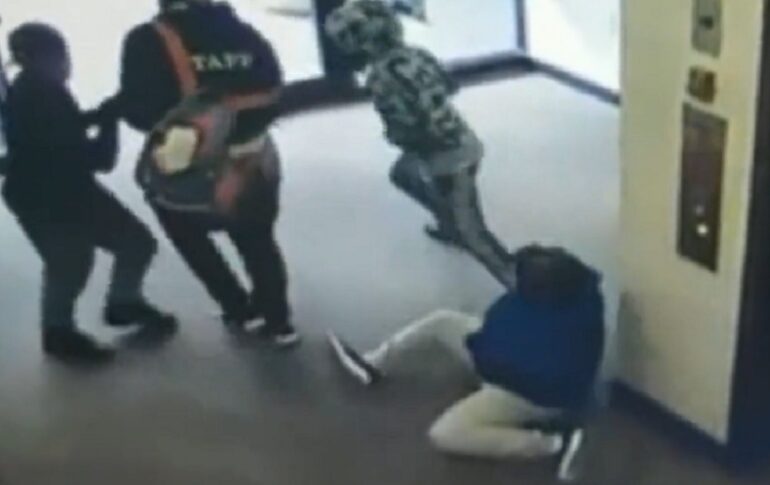 SAN FRANCISCO, CA—A 70-year-old Asian woman spoke to ABC7’s Dion Lim from her bedside after being viciously beaten and ghetto stomped in the head by multiple attackers in broad daylight in San Francisco.

Mrs. Zheng’s mother, who only wanted to be identified as Mrs. Ren, spent the past two years hiding inside from COVID until Sunday.

Through an interpreter, Mrs. Ren said, “Yesterday was one of the first days for a long time she went out and this is what happened.”

Now Mrs. Ren hides inside for another reason.

Four “teens” approached Mrs. Ren Sunday evening and asked her what time it was. She replied “5 o’clock” and then proceeded to show the suspects her watch, since she doesn’t speak English and wasn’t sure if the teens understood her, according to ABC7.

1 suspect asks her for the time. She shows her ⌚️ b/c she doesn’t speak Engl. She realizes the group is “up to no good” so she runs into the elevator.

The susps follow her & search her. They find an iPhone7. When Mrs. Ren refuses to give it up, she’s assaulted. #StopAsianHate pic.twitter.com/6n42qnhPKk

“They search my body and I quickly realize they’re up to no good.” Mrs. Ren stated.

The suspects soon realized she had an iPhone7.

Housing complex surveillance footage provided to the SFPD showed the suspects following Mrs. Ren into the elevator when she refused to hand over her phone.

“They got really mad and pulled me down.”

The group of teens pounced on Mrs. Ren like a pack of wild chimpanzees and threw her to the ground and repeatedly kicked her in the face and stomped on her.

“They used their fist to hit my head multiple times and then they pulled me down and kept kicking me.”

But the horror doesn’t end there. When Mrs. Ren tried to hide in the hallway and was unable to close the door—the suspects returned. They didn’t want her watch or earrings, they wanted her keys and to also take turns beating her.

Her daughter begins to sob. “I never expected this to happen to us, even though we saw a lot of reporting from our station in particular you, Miss Lim,” stated Mrs. Zeng.

“I want this story to come out so people know and so for other people to be aware to be safe.”

Those with information about the case are asked to call the SFPD tip line at 415-575-4444 which allows reporting parties to remain anonymous.