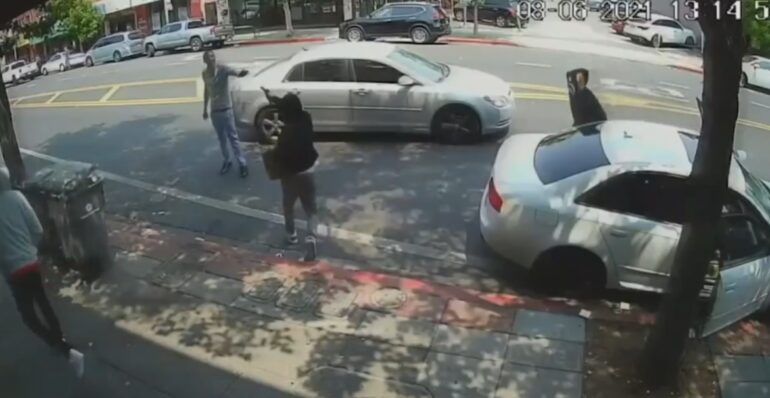 OAKLAND, CA—Assaults, arsons, break-ins, and robberies at gunpoint. These are the daily struggles business owners in Oakland’s Little Saigon face multiple times a day; on a daily basis. The community is so fed up, that they’ve banded together to make their voices heard.

The owner of family-run Cam Huong restaurant on International Boulevard, Lele Quach, told ABC7’s Dion Lim about the stresses and terror of doing business in Oakland.

“Crime is increasing exponentially on the daily. Every day, it’s increasing, it’s getting more violent more brutal,” she continues.

The owner of Sun Hop Fat, a grocery store, told Dion Lim she closes at 4 or sometimes 5:30 p.m. compared to her original closing time—8 p.m.

“My workers have not enough income. They feel sad because they work less, they don’t have enough income,” she says in the parking lot of her business. She mentions how her business has suffered through multiple break-ins and robberies, reports ABC7.

“Some guy drove a truck and hit my store three or four times, and everything is broken,” she says as she shows the tire marks that are still present on the store floor.

Kim Viet Jewelry’s owner, Thinh Le, says he sleeps on the floor of his store every night after being broken into 10 times in one year.

“You feel like you’re in jail of your own cell. You don’t feel free. You’re living in fear,” he says. Viet has been vocal in the past but now has strength in numbers.

Nearly two dozen business owners have come together to share surveillance videos of arsons, sideshows, and attacks. Dozens of businesses have stated they’re considering closing down.

“Please don’t leave, number one. I’m here, I hear you, I see you, I’ll contact them, we’re getting together to have a conversation on how can the city be better in investing in Little Saigon, but public safety as well,” says Shen Thao, Oakland City Council President Pro Tem.

Little Saigon has started a fundraiser to help with high-definition cameras and other needs. Please click HERE if you can donate.