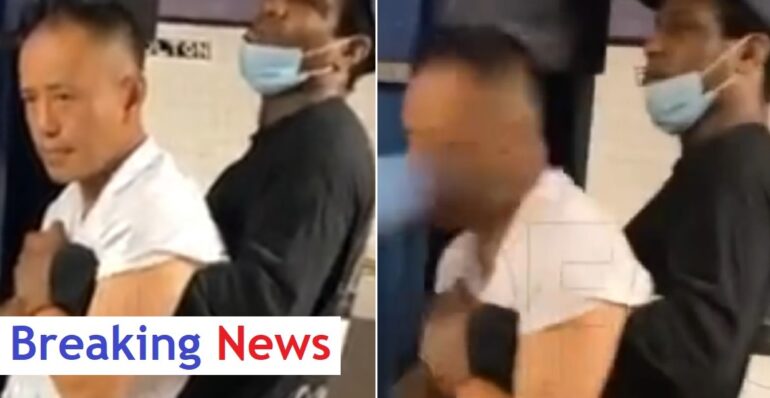 MANHATTAN, NY—The Asian man who was savagely beaten in a Manhattan subway station on Friday said the ultimate indignity came afterward when the attack was depicted as vigilante justice—after he was accused of attempting to molest a girl on a train.

“I’m the victim here!” the 42-year-old married Asian man and father from Queens told the Daily Mail on Tuesday, May 31. “I fell asleep on the train, and I woke up to a bunch of guys grabbing me and assaulting me.

“I was targeted and held against my will, was put in a full nelson and assaulted by two different guys,” he added. “I didn’t even know what the hell was going on. And there was a crowd watching and nobody was helping.”

The 42-year-old Vietnamese victim did not want to give out his name and the girl he “supposedly” molested has yet to come forward.

The disturbing video was shared online by Asian Crime Report and Reddit over the weekend and garnered millions of views. The footage showed the Asian man being restrained and pummeled by a group of African-American men at the Fulton Street station.

The NYPD are now searching for the African-American suspects and is offering a reward.

WANTED for an Assault on the “A/C” train platform of the Fulton Street subway station. #Manhattan @NYPD1pct TD#2 on 5/27/22 @ 3:30 PM a 42-yo male victim was punched multiple times about the body by two unidentified males. Reward up to $3500 Call 1-800-577-TIPS CONFIDENTIAL! pic.twitter.com/1rEWVqvANY

However, the Queens man has seen his own criminal record go public, after the media reported on his extensive criminal history. An NYPD source told Daily Mail that the victim has never been arrested for a sex crime.

The victim, who does plumbing and air conditioning work for a living, told Daily Mail that he’d been drinking with a friend before falling asleep sitting up on the train.

A witness to the incident remained at the scene and told ABC7’s CeFaan Kim that the incident happened Friday around 3:30 p.m. The witness stated the group of African-American men said the Asian man attempted to sexually assault a woman on the train, so they intervened.

The word of three African-American males is worth more than that of an Asian man minding his own business.

According to CeFaan Kim’s sources, the Asian man was also exposing himself on the train and was inebriated. However, ABC7’s tweet has since been taken down.