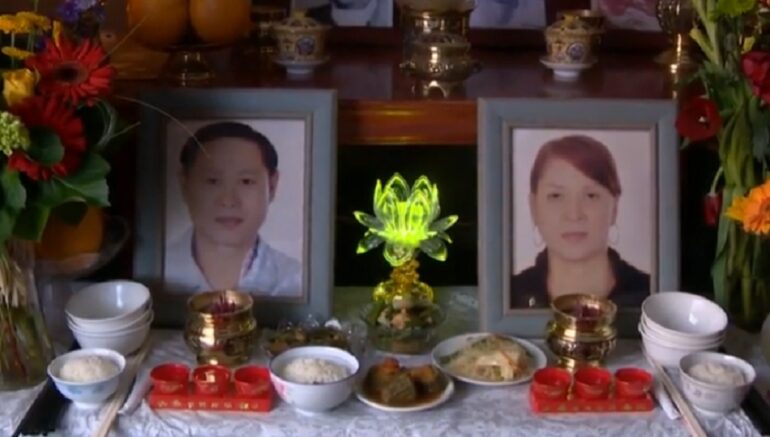 SACRAMENTO, CA—A married couple who now leaves behind two young children were killed after being struck by a car involved in a high-speed chase with police in south Sacramento on Saturday morning, May 21.

Family members said the couple were nail technicians in the Roseville area and leaves behind a 5-year-old and an 8-year-old. They were out getting coffee when they were struck and killed by another driver who was being chased by police, reports KCRA3.

“I miss him,” Nguyen’s mother Phuong Hoang said. “And I will always remember what he would do for me and my husband.”

The family of Tien Le and Binh Nguyen, the two hit and killed in a crash Saturday morning, open up about their unanswered questions in what led to the wreck, and the investigation underway.

The couple leave behind a 5-year-old boy and 8-year-old girl.@kcranews pic.twitter.com/KtYNVjcTuz

Another relative, Son Dang, said his brother-in-law was “a very friendly and lovely person, and his wife also.”

It all started when Sacramento police attempted to conduct a traffic stop on two cars that were “driving recklessly and endangering the community in the area.” Both vehicles led officers on a chase for about half a mile just before 8:45 a.m., according to KCRA3.

That’s when one of the cars crashed into an uninvolved car at Stockton Blvd and 65th Street, police said.

Both Tien Le and Binh Nguyen were killed while the driver of the speeding car sustained major injuries and was taken to the hospital, according to the CHP.

The other car involved in the chase fled the area and has not been located.

Police said a total of “26 seconds elapsed from the time officers activated their overhead lights and sirens until the fatal collision occurred.”

CHP told KCRA3 that the crash marks the third deadly car crash in the greater Sacramento area in a single week.

Anyone with information is asked to contact CHP’s south Sacramento unit at 916-897-5600 or Sacramento Valley Crime Stoppers at 916-443-HELP (4357). Callers can remain anonymous and may be eligible for a reward of up to $1,000. Anonymous tips can also be submitted using the free “P3 Tips” smartphone app.