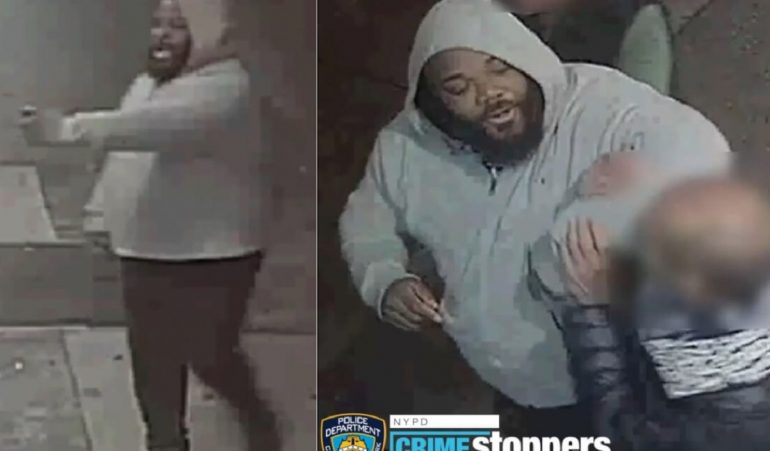 BROOKLYN, New York—Authorities in Brooklyn are looking for an African-American male who first mocked three Chinese men for speaking Cantonese, then violently attacked them earlier this week.

The Hate Crimes Task Force is now investigating the matter.

Authorities released video footage Wednesday night of the suspect responsible for the attack, which occurred around 8:30 p.m. on November 2 in front of a restaurant at 6418 20th Ave. in Bensonhurst, reports AMNY.

The assailant walked by three men—ages 51, 56, and 57—and mocked them for speaking Cantonese. That prompted the 56-year-old victim to confront the suspect about his actions.

Within seconds, the assailant punched the man in the face, then flashed a knife and sprayed the men with an unknown liquid substance—believed to be pepper spray, according to AMNY.

The surveillance footage shows the assailant being pulled away from the location by several men. The assailant then fled the scene moments later on foot along 20th Avenue.

The incident was reported to the 62nd Precinct. Paramedics brought all three victims to Maimonides Medical Center for treatment. None of the injuries were life-threatening.

The African-American suspect is described by police as a heavy-set individual, between 25 to 35 years of age, weighing between 220 to 225 pounds, who was last seen wearing a gray hooded sweater dark-colored pants, and black sandals.